You are here: Home>Herts history>Towns and Villages>Hitchin>Raising the Dead in Tilehouse Street- how a disused graveyard was cleared for a housing project 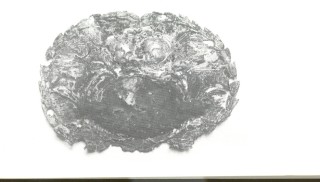 Tilehouse Street burial: Coffin handle plate from the wooden coffin of Hannah Foster 1811. The Foster family of six brothers were among the foundation members of the Baptist Church in Hitchin

What do you do with a disused graveyard, overgrown and into which folk would thoughtlessly throw their rubbish ?

Rev R.H Tebbutt, Minister of Tilehouse Street Baptist Church decided that the site, if cleared, would be suitable for development of flats for elderly persons. The site is a corner of the Church graveyard, on the east side bordering on Wratten Road. The land had been in the ownership of the church for three hundred years and it was not easy to make a decision to sell, historical and conservation interests not withstanding! However negotiations were entered into with Aldwych Housing Association Ltd with a view to purchase for development.

From the Church’s point of view, the most important task was the clearing of the graves to the satisfaction of the Home Office.After the necessary newspaper advertisement had been displayed, a contract was given to a Mr Norman Renshaw of Biggleswade to clear theground of human reamins and re-inter them in another part of the graveyard. Mr Gill Burleigh, Field Archeologist with the North Herts Museum Department, hearing of the project, asked and was given permission to take possession of findings of archaeological importance and to record details of the gravestones and findings on the site.

Digging commenced in Novemember 1978 and finished in June 1979. Gravestones in good order were removed from the former site and placed in a new position. There were 115 listed graves, though in all 232 bodies were exhumed. Of these 20 had died under the age of 10 years. 86 were males the eldest of whom was 95 and 101 were females, the oldest being 90 years.It was discovered that some stones had on a previous occasion been removed and placed around the graveyard wall.There were also a number of unmarked interments. The largest stone was that of Rev John Needham, Minister of the Church from 1716-43.

Many of the burials were simple wooden coffins placed in earth graves, the coffins having long since decayed and the only remains being bones, the coffin furniture and sometimes a mark or “ghost” shadow where the body had been. However a good number of the graves were more elaborate in that some were coffin-shaped brick-lined resting places with room for several coffins to be placed on top of each other and a stone slab with an earth covering on top. Others had brick built arch-vaults separating each subsequent burial.In most of these cases the coffins were relatively well preserved, the furniture also being in a good state of preservation though the bones in most cases had crumbled away.

Three graves were of particular interest. One was that of Susanna Morell, wife of the Rev Morell, President of the Wymondley Academic Association. This was a rectangular chamber-type lined with brick and consisting of three chambers one above the other, though here only one coffin was found. Another was that of the Foster family whose long association with the Church goes back to the days of John Bunyan. Here a long underground vaulted structure was found, internal measurements being 2.53 metres long, 1.2 metres wide and 1.44 metres high. There were two lead coffins inside upon wooden beams. Inner wooden coffins were enclosed in lead coffins with soldered seams and these in turn were encased in thick wooden shells covered with fabric and studded with nails and plates in a style of urns and armourial devices. They had eight iron handles on plates decorated with cherubs. On the middle coffin lead name plates were soldered and the lead was covered in incised geometric decorations.All the coffins were well preserved and so too were the skeletons, the bones still being joined by the ligaments. The third grave of interest was that of the Thomas family where the structure was like the Foster family grave but having also several side vaults. This complex structure could contain up to eight burials though there was only one lead coffin similar to that of the Foster coffin.

As well as the graves a lime tree of large proportions had to be removed and under this was discovered a well which must have been used to fill the Baptistry in the old Chapel. One Charles I rose farthing was also found.

All the artefacts and furniture have been taken to the Hitchin Museum or the Letchworth Museum. Following the re-interment of the remains the area surrounding was returned and a stone suitably inscribed was placed there. A memorial service was held in the Church on the morning of 14th September 1980, followed by a short act of commital at the graveside. It is hoped that sometime in the near future an exhibition of the findings will be on display in the Hitchin Museum and the Church is to receive from the Museums Department a full documented record of the graves and the findings.

The proposed flats are now a reality, tenants taking posession during July of this year.The block of flats, to be called Robert Tebbutt Court, was officially opened on 20 September 1981 by Mrs Ruth Tebbutt.

Acknowledgement My special thanks to Miss G Woodbridge who researched this project for a G.C.E ‘A’ Level examination.