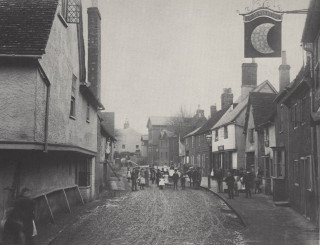 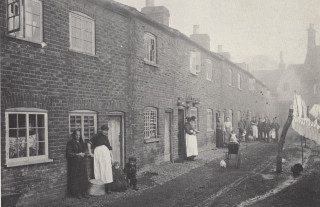 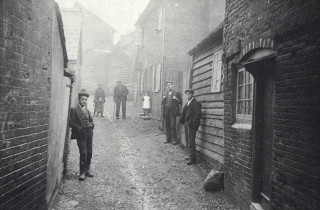 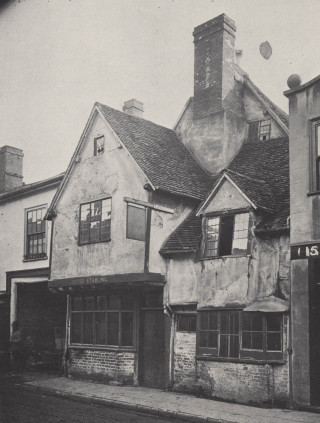 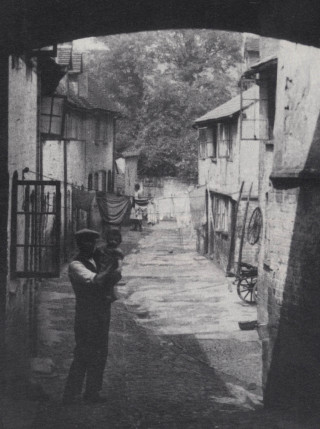 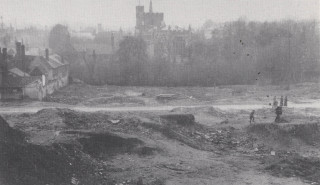 Demolished and gone for ever. The area now known as St Mary's Square, 1930s

Despite the beauty of many buildings in the town, Hitchin had its dark side by way of poor housing and disease.  The Queen Street area was a notorious slum and rapid increases in population led to overcrowding.  The mass of tiny yards dating back to the 1700s developed near St Mary’s Church and became the most densely populated area of the town.  Dotted amongst the tenements were 13 pubs and several slaughterhouses.

Although the area was central, the whole district was taboo for the rest of Hitchin’s inhabitants.  Policemen patrolled in pairs and children were warned to keep away for fear of smallpox.  In the 1920s the Hitchin historian, Reginald Hine described them as “a squalid quarrelsome underworld oflittle yards”.   This problem had reared its head seventy years earlier after William Ranger inspected the town and wrote about the hazards of people living so close together without adequate facilities.  There were found to be 400 residents suffering from typhoid from polluted wells.   Ranger’s report of 1849 particularly singled out Chapmans Yard as one of the worst.  The yard is described as being filthy and the habits of the people “exceedingly dirty” and that the privy was not used; instead, excrement was “thrown upon the yard.”

Other areas included The Folly, Hitchin Hill, Boot Yard, Lyles Row, Thorpes Yard, Adam & Eve Yard, Parcells Yard and Barnards Yard.  In Seymour’s Alley, 25 people in 6 houses had no privy accommodation of any kind.  In some places, the drains were open and sewage discharged to the surface mixed with rotting waste from slaughterhouses.   In 1850 Hitchin’s Board of Health was formed in response to Ranger’s report.  Interest in sanitary improvements had not faded as the town was still recovering from cholera, which had claimed over 40 lives.

By 1854, the town had a new water supply and sewerage system which led to a fall in the death rate but problems persisted for many more years mainly due to internal wrangling.  In 1857, a storm caused water in the main sewer to rise, resulting in sewage coming out of domestic taps.   Alice Latchmore was a child in 1919 and described the cottages in the Queen Street area:  “Somehouses had earth floors.  The windows and doors were small and in a few cases the only window downstairs opened to a passage where there was no light and very little air.  The only bedroom was like a stable loft, reached by a decrepit stairs or a ladder.  Tea chests served as tables and 5 or 6 children in one bed was not unusual.  It was very much survival of the fittest”.   I

In 1902 Queen Street was compared to the worst slums of London.  In 1909, the houses were described as “…old properties in decaying condition with rats and mud”.   Another resident who was a boy in 1919, said of Chapmans Yard, “you could see the shabby houses and entrances to whatseemed to a child frightening yards, two of which were so narrow that houses facing each other were little more than a handshake apart”.   In 1921 Hitchin Urban District Council declared the housing was unsanitary and that they should be demolished so clearance began in 1926.  A total of 174 houses were pulled down in the area now known as St Mary’s Square, a fact commemorated on one of the flights of steps leading up from the river.

The 637 inhabitants were re-housed on the Sunnyside Estate with some not leaving their yards until the final moments.   There was more demolition in the 1950s and when Barnard’s Yard came down, a Tudor half crown was found under the floor.  Local Councillor, Charles Worbey built himself a new house with the Elizabethan materials and some of it went to America for use in a replica of Hampton Court.