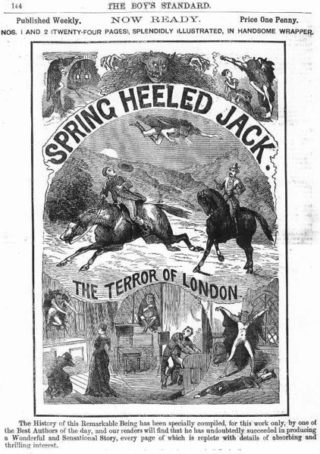 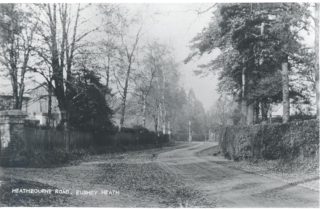 Of the various bogeymen believed to have plagued people over the centuries, Spring-heeled Jack exerted a particularly strong fascination during the 19th century. Though initially associated with London, supposed sightings reached as far north as Liverpool, and Jack was, if the tales can be believed, active in Hertfordshire during the 1840s.

The first reports of Spring-heeled Jack were in 1837, in South London, where on consecutive days he attacked a girl and caused a coach to crash. The girl reported that he had claws “cold and clammy as those of a corpse”, and he allegedly escaped after the encounter with the coach by jumping over a 9 foot high wall.

In the months that followed, there were several other attacks. Reports of his appearance varied, but he was often described as having a terrifying face with red eyes and metal claws, and some reports claimed he breathed blue and white flames. There were several reports of his prodigious jumping abilities, which gave rise to the belief that he had metal springs in his heels, and hence his name.

Jack caught the public imagination in a big way. Besides sensational newspaper reports of the various attacks, several pamphlets were published, and both “penny dreadfuls” and plays in cheap theatres appeared about fictional exploits.

Nevertheless, reports of attacks in London grew less frequent. During the 1840s, however, Jack appeared to have moved out into the surrounding counties, including Hertfordshire.

There were reports of attacks by Spring-heeled Jack in various parts of Hertfordshire, but the threat seems to have been taken especially seriously in Bushey. According to a later recollection:

At times I have seen a noisy crowd of youths armed with sticks shouting for hours for Spring-heeled Jack to appear, sometimes in Old Bushey, sometimes on the Heath, but the elusive gentleman never appeared.

Whether or not Jack’s original appearances were unearthly or supernatural, it’s certain that many later ones were the work of copycat hoaxers. One of these, related by Reginald Hines, concerned the eminent judge Sir Henry Hawkins, when he was a young law student spending the winter in Hitchin. Though the account makes no reference to any actual attacks, such as Jack had made in London, it relates how

he had played the ghost and spring-heeled Jack…along the fence of the Priory Park. Those springs on his shoes had worked remarkably well. What glorious sport it had been jumping over the fence, first one side, then the other! And, thanks to his father’s night cap and shirt, and to his own under-sheet and gloves, what a marvellous ghost he had made!

Who Was Spring-heeled Jack?

Both at the time and since, there have been many theories as to who Spring-heeled Jack really was, from a demonic being to more sceptical ideas about pranksters. One particularly persistent theory pointed to Henry de La Poer Beresford, Marquess of Waterford, a dissolute young nobleman whose character at the time was certainly consistent both with pranks and with the particular targeting of young women.

By 1842, though, the Marquess was living a more respectable life. In any case, the last reported sighting of Jack was in 1904, so that, unless we accept a supernatural explanation, he could hardly have been one person throughout ― considering he’d kept the spring in his heels. If Beresford was responsible for the initial cluster of attacks, it’s probable that all subsequent cases were copycats ― as with Hawkins.

Whatever, the truth, Spring-heeled Jack became a staple of the popular imagination and has almost certainly inspired many later figures of horror fiction and film. Hertfordshire played a small but genuine part in his legend.