You are here: Home>Herts history>Leisure>Threads of Time 2>Upstairs and downstairs at Hitchin Priory

Upstairs and downstairs at Hitchin Priory

The Delmé Radcliffe family and staff 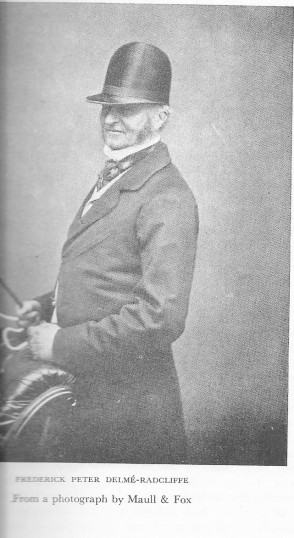 At the fictitious “Downton Abbey” the number of family members is neatly balanced with a similar number of staff.  The more modest household at The Priory in Hitchin demonstrates that in practice there was a large complement of servants to support a family.*

The 1851 census recorded Frederick Delmé Radcliffe, aged 46, a Landed Proprietor and Head of the household.  The family comprised his wife, Emma, four daughters and two sons ranging in age from 9 year old Evelyn to Arthur who was 10 months, plus 18 servants.  The needs of the children were catered for by a Governess, a Nurse and two Nursery Maids.  Emma also had a Ladies Maid.

Other staff included a Butler, Housekeeper, two Laundry Maids,  two Housemaids, a Still Room Maid, two Kitchen Maids and a Scullery Maid and a Footman.  The Butler, Richard Wadlow, was described as married and his wife is to be found in Tyler Street [Tilehouse Street] with their son, also Richard, and daughter. There is no mention of a Cook.  Perhaps she was absent on census night?  It was Mothering Sunday and might have had the time off to visit her family.

There were also two grooms (one of them was John Wadlow, Richard’s brother).  Also included in the list of servants was Ann Barber, aged 74, described as an Annuitant and “formerly a Nurse”.  Was Frederick looking after his old nanny?

Frederick Delmé Radcliffe died in 1875 and so by the time of the 1891 census it was his son, Francis, who was Head of the household.  He was recorded as a Commander RN Retired and aged 45, some six years younger than his wife, Mary.   To support them there was a Housekeeper, a Ladies Maid, 3 Housemaids, a Kitchen Maid, a Scullery Maid, two Footman, a Coachman and a Groom.

Once again, no mention of a Cook  and no record of a Butler.  (Richard Wadlow, the Butler in 1851 had moved.  The 1881 census recorded him as a Licensed Victualler, running the Red Lion at Spalding and employing 6 servants.  His brother, John, was with him).  Perhaps the Butler had the night off.  The post did not disappear, the 1901 census recorded William Everett as Butler.

There were no children and so no need for nursery maids.  The other change from 1851 is that there are no Laundry Maids resident in the household.  This might suggest that they lived at home or alternatively that much of the washing was sent out.  Certainly there was a Steam Laundry in Ware Road, Hertford by this date.  There was, again, an old retainer, Ann Rivett, aged 87, described as a Nurse Pensioner.

Francis Delmé Radcliffe was still the head of household in 1911 and the family comprised his wife and nephew.  However, running the household still required a number of servants.  The office of cook and housekeeper were combined in Jane Legg who had been recorded as Housekeeper in 1901.  There was also a Lady’s maid, 3 Housemaids, a Kitchen Maid, a Scullery Maid, a Butler, Footman and Groom.  There is also a Hall Boy, Alfred Quaman, recorded as born in Burmah, Rangoon.

*  Further information on domestic service can be found in P. Horn, “The Rise and Fall of the Victorian Servant” (Gloucester, 1990).