Contributed by Mary and Howard Roberts 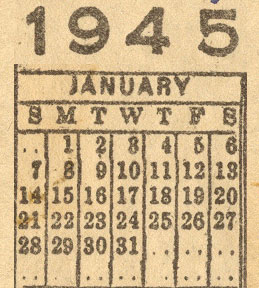 It was the 5th winter of WW11 and my friend Jean and I had been invited to stay with a school friend in Kimpton from the 2nd to the 5th of January.

On Saturday the 3rd we all went to a barn dance in the village, at which there was a celebrity guest, (James Mason) a famous film star of the day. He was staying with friends in the village and was much admired by us. A good time was had by all.

On Monday Jean and I had to return to Hitchin as the school term was to restart on Wednesday. We caught a bus from Kimpton to Luton, where we should have been able to get a bus to Hitchin at 3.45pm. As our bus turned into Park Square, there was a tremendous bang and everything shook. Nothing was said officially, so we assumed that there had been an explosion somewhere near to Luton. Ella, our friend, left us at the Hitchin bus stop to return to Kimpton. And there we waited….and waited.More and more people joined the queue but no bus appeared. Nobody came to inform us of what was happening.

At 7pm some officials arrived to tell us that a lorry, loaded with bombs, had caught fire and exploded near Offley and that the road was impassable. They also told us that there would be three buses only out of Luton towards our area. One for Hitchin passengers only, one for Letchworth and Baldock passengers and one to the surrounding villages.

All passengers for Hitchin were put into one queue to get on the first bus which was a doubledecker to accomodate the number of people there. As many people as possible were crammed into the bus and nobody was left behind. As you can imagine, the bus was absolutely full, (quite unlawful now), three to a seat, standing upstairs and down.

And so we departed Park Square well laden, in wintry conditions, and because of the route via Lilley and Hexton, it took an hour to travel to Hitchin.

I arrived home at 8.30pm to be greeted with ‘I thought you were going to YPF (Young Peoples Fellowship) this evening’. Being blackout conditions, he was due to meet Jean and I from WRBC (Walsworth Road Baptist Church) at 9pm. Mobile phones had not been invented and not many homes had telephones, so it was not possible to tell parents what was happening.

We found out on the way home that the lorry blew up next to a farmyard and house in which a kiddies’ birthday party was being enjoyed but that everyone got out and nobody was injured. Quite an eventful ending to a nice weekend!

Unlike this year, January 1945 was snowy, frosty and blowy. Monday the 5th was a cold, crisp but sunny day and my Dad and I were in Welwyn Garden City, visiting the only store in town at that time, (there were a few small shops in the road from the station). We were waiting on the station platform, in a glorious sunset, for the train home to Hitchin, when there was an almighty explosion at 3.30pm. Our first thoughts were of a V2 Rocket which gave no warning of it’s approach. However, later on, back at home, we heard it was an American lorry loaded with bombs blowing up just out of Offley on the way to Lilley. The explosion occurred by a farmyard and house and caused a deep crater taking up the full width of the road. How this occurrence would affect me I found out the next morning.

My Gran, who lived with us, always went to her sister’s for a month or more in January. The sister lived in Wing, on the road from Leighton Buzzard to Aylesbury and Gran was due there on Tuesday the 6th of January.

The Tuesday dawned in snowy conditions and, being on British summertime, dawn was late in those days. However, undaunted, Mum, Gran and I, with luggage, slipped and slid down to the bus stop in Nightingale Road to await (hopefully) the arrival of the Luton bus. It was a little late but we boarded it with high hope of reaching Luton. There were not many passengers about that morning.

All went well as far as the top of Offley Hill. There the bus parked and everyone on board was told to disembark. We three intrepid travellers appeared to be the only ones going to Luton and we were informed that we must walk to Lilley and wait for a bus (if lucky) to continue our journey or hope a kindhearted motorist might give us a lift. By this time it was snowing heavily and a freezing cold wind blowing and so we set out to walk the one and a quarter miles to Lilley. It was jolly cold but after five or so minutes, slipping and sliding in deep snow, we begun to warm up. As we left the protection of the last houses, the wind got to work on us. The umbrella was useless and we were soon coated with snow.

As we approached the farmyard on our left we saw the large crater in the road and noted the debris piled up on top of the roadside bank. We had to climb up onto the bank and then negotiate the debris. I had no trouble with this, nor mum, but Gran, who was in her mid sixties with rheumatic joints, found it all a bit of a problem. She struggled round the crater edge with our help and we eventually reached the relative ease of the road again. I can still picture the sight of the lorry front axle sticking out of the farmhouse roof. Needless to say, there was quite a bit of damage to the house, although, because of the snow there was less debris than you would imagine.

So we pressed on and in about an hour, eventually plodded into Lilley, quite exhausted. We must have looked a sorry trio, covered in snow, standing at the bus stop. There was no sign or news of buses. Luckily, within ten minutes, a kindly motorist, in a smart American V8 Ford, pulled up and offered us a lift  into Luton town centre. Before long my Gran was on her way to Wing and we were walking back to Park Square to find the bus back to Lilley or maybe even to Hitchin. There was a bus, but Lilley was its destination, and so we climbed aboard for a sitdown and were soon on our way, contemplating the return walk. Luckily it had stopped snowing. The trek back to Offley was quicker for two of us, with no luggage to hinder us. Fortunately there was a bus for Hitchin waiting at the top of Offley hill and we were soon on our way home, arriving back in Nightingale Road around 3pm. It was great to get home and have something warm to eat and drink and rest our weary legs.