As told to me by Mrs Eileen Smith 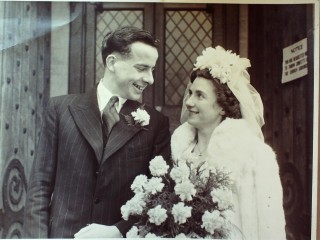 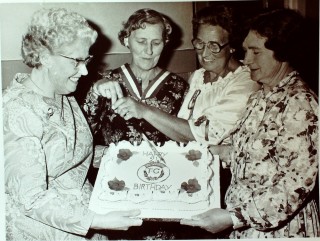 The Guild's 21st birthday.Eileen is standing on the right. 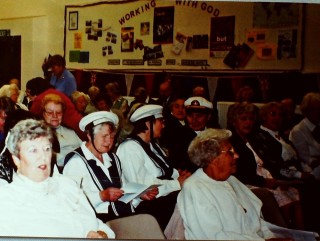 Eileen was born in London in 1928 and was married in south west London in 1947 at st Mary’s Church, Blackheath. It was the coldest day of the year and the snow was thick on the ground. Eileen and her husband moved to Hitchin in 1950 and bought a shoe repair shop in Nightingale Road. In Eileen’s own words:

‘We had only one room and a kitchen, with no inside toilet or bathroom. There were  three bedrooms up a narrow twisted staircase. We brought up our three children whilst living there. We later purchased 99 Willian Road in 1954 at a cost of £2400 but it was not finished for us to move into until 1956, where we rounded off our family with one more child. Our mortgage was with the Hitchin Building Society when Mr. Brooker was the secretary.

My memories of Nightingale Rd. was that it was quite self sufficient in those days, as it boasted a Notts bakery, Co-op, Fish shop, a butchers and even a Doll’s Hospital. I remember our milk was delivered by horse and cart, the horse loved to step up on the doorstep to receive a carrot or an apple. We lived opposite ‘The Woolpack’ and we were amused on a Sunday to witness the regular actions of some men who popped into the pub for a drink, then went over to the Catholic Church in Grove Road for mass, then returned to the pub!

From 1965 to 1991 I acted as a welfare helper at Strathmore School. Whilst standing in a bus queue I overhead some young mothers complaining that there was nothing to do so I decided to form a Townswomen’s Guild and became the founder member. The inaugural meeting was held at Highover school in 1957. A good number attended and eventually our membership rose to over 70. We now meet at Woolgrove Rd community centre. The guild has brought a lot of companionship and a chance to new skills, plus displaying talents we never knew we had.

My husband Ernie ran our shop for 25 years and we also had a market stall to sell new shoes. Later we renovated the shop and sold it on. It is now a TV shop. Whilst we lived in Nightingale Rd. the Bacon factory was thriving and employed many people and in it’s early days it also included an abbattoir. There was the Hitchin Band which played in Bancroft Recreation park. The park also had a pond, bowling green and tennis courts.

I was diagnosed with appendicitis at one time and the operation was carried out at the old Hitchin Hospital in Oughton Head Way.

Our TWG joined the Queen Mary Knitting Guild, which later continued under the patronage of the Queen Mother. Once a year selected members went to display their contributions at St James Palace. The knitted items were distributed amongst the needy poor. We were fortunate enough to speak to her Majesty, The Queen Mother, who had fond memories of Hitchin and St Paul’s Walden when she was young.