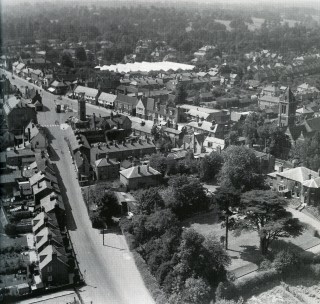 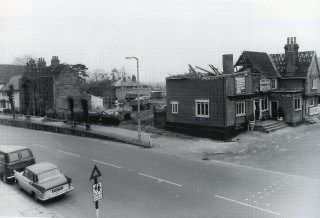 The sad sight of Maidenhead, one of Hoddesdon's oldest inns being demolished in 1964
David Dent 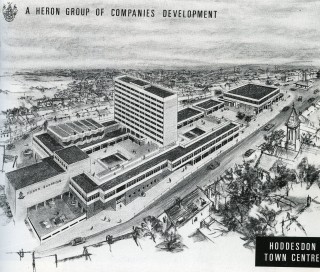 An artist's impression of the Tower Centre.
David Dent

During the 1960s and 1970s, Hoddesdon lost more of its buildings than at any time during its history. Many of these demolished building were familiar landmarks, such as the Bull Hotel and Yew House. The properties on the high pavement on the eastern side of Amwell Street along with Maidenhead Public House and a number of victorian cottages, were bulldozed in 1964 to clear the way for the Tower Centre development.

Work began on the centre in 1965 and in the Hoddesdon Journal of October 1966, the architect was quoted as saying:

“The pedestrian courts in the development are to be treated in an interesting and artistic manner, and landscaping will be carried out as far as is practicable, including special lighting and seating to give pleasant surroundings in which shopping can be done in comfort”