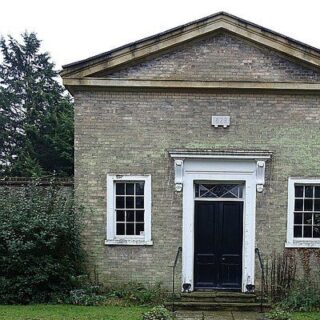 The Society of Friends, better known as the Quakers, has a long and prominent history in Hertfordshire. From the first purpose-built Friends meeting house in the world, built in Hertford in 1670, to the Quaker ideals behind the Garden City movement, the Society has been prominent in the life of the county, including the borough of Broxbourne.

The Society of Friends

The Society of Friends was founded in the mid-17th century by George Fox in the north-west of England. Although Fox had been preaching earlier, the establishment of the Friends is commonly dated to 1652, when he preached to a thousand people on Firbank Fell in Cumbria.

Central to Fox’s message was that each person contains the Holy Spirit, giving them a personal relationship with God, without the need for doctrine or hierarchies. In the same way, Fox believed that no place was holier than any other, so meetings could take place anywhere. When formal meeting houses began to be built, these were treated as convenient, rather than special places, and consequently designed simply and without adornment.

The Quakers were persecuted, along with other nonconformist groups, until the Act of Toleration was passed in 1689. Since then, the society has punched well above its weight in influence, with a large proportion of prominent reformers and philanthropists being Quakers — and this has been very much the case in Broxbourne.

The Hoddesdon meeting dates back to at least 1682, and in 1697 a meeting house was built in Marsh Lane (now Essex Road). This served until 1828, when the original building was sold and a larger replacement built on Lord Street, which is the present meeting house. The architect was William Alderson, who designed a number of Quaker buildings throughout the country, as well as St Bernard’s Hospital, now known as Ealing Hospital.

In 1929, a smaller hall was built on an adjacent plot, and the two buildings were connected in 1978. Although no meetings were held between 2011 and 2019, the Lord Street Friends Meeting House is once again in use.

The unusually extensive listing for this building describes its historic interest as:

a modest, purpose-built, meeting house standing in its attached burial ground, expressive of the development of the Quaker movement.

Its description of the meeting house’s architectural interest points out that:

“The plain Classical design typifies the modest nature of Quaker meeting houses, and the building retains its essential historic form and character from the time of its construction; preserved interior fittings including the Elders’ stand, dado, and shuttered partition to the two former retiring rooms, provide evidence for the division of space and internal arrangements typical for earlier Quaker meeting houses