'the middle of nowhere' 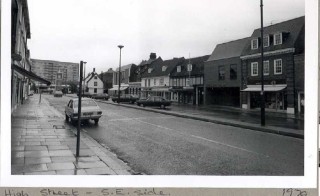 In 1979 I moved to Hoddesdon from Palmers Green, which is in the London Borough of Enfield.

Hoddesdon was so different to London and my family thought I had moved ‘ to the middle of nowhere!’  My parent’s did not drive and had to visit on the ‘ Green Line Bus’. They had to catch the ‘Red bus’ into Enfield from Palmers Green and then catch another bus from the bus station to Hoddesdon.

I moved to Hoddesdon in  August 1977 just after I got married. Hoddesdon Library was situated in Lowewood House the other end of the town when I first moved to Hoddesdon. It is now the museum, a lovely old house with steps up and down to each room and so much character, but not suitable for a modern library. I was employed to help with the move from the old library to the new which was to open in October. You can see the new library on the right hand side of the photograph, the modern looking building.

The market day in Hoddesdon was held on a Wednesday. Nowadays the market is held down the middle of the town. Before that it was held in the strip of road marked out for parking outside the shops and library. You could not park down that strip on market day.

There was an ‘off Licence’ shop next door to the library. You could watch people trying to park to go to the shop. If there was no space they would just pull up on the pavement outside the shop. Always male drivers!!!!

Pearce’s Baker’s had a large shop opposite the library. Whilst I worked in Hoddesdon we had a bread shortage for a few weeks. You could tell when the bread had been baked, a queue would form outside the shop. I should imagine it would have been like queuing in the war for rations.

The shops all had character , and some of them were in old buildings , a challenge for the disabled and people with children but the street did have character.