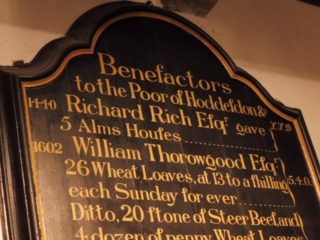 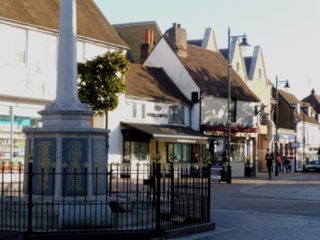 Approximate site of Rich's almshouse as seen from the War Memorial, 2018
Colin Wilson 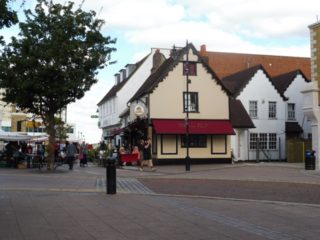 Approximate site of Rich's almshouse to the right of Maison Paul. The clock tower is visible to the left of the tree, 2017
Colin Wilson 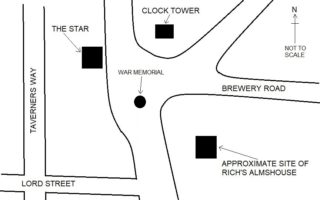 The benefactions board in St Augustine’s church, Broxbourne, records that Richard Rich gave five almshouses in 1440. This was during the reign of Henry VI, who at the time was still only 19 years old (having become king in infancy) and towards the end of the Hundred Years War with France.

Tregelles p312 notes that Richard Rich was a silk mercer and sheriff who also had a house in St Lawrence’s in the City. According to Fuller’s Worthies (published about 1650), Richard Rich was the sheriff of London in 1442. In the 15th century the Rich family owned Bradshaws; this is down the hill to the south of the town, on the west side of the road, just north of the Spital Brook. Richard Rich owned two inns, The George (also noted in Victoria County  History) and The Cock. He died in 1469 and was buried in St Lawrence Jewry, London.

Tregelles further notes that ‘among his numerous and minute bequests to religious houses and hospitals there is no mention of any in Hoddesdon, which helps to show that none existed at this time’. This is strange considering his later references to the almshouses and the map he includes. It also omits the Spital almshouse or hospital just down the road from his house. Maybe the reference is to charities other than those for the poor.

Clutterbuck vol 2 p72 states, ‘RICHARD RICH, esq, by deed dated A.D. 1440, gave five Almshouses, situated at Hoddesdon, on the South-east side of the main street, for the habitations of poor people of that Hamlet’. Cussans mentions these almshouses, but Victoria County History does not.

The almshouses were located near the centre of what was then the small market town of Hoddesdon, probably on a site behind a (later?) building which in June 2018 was the Deer Café Bistro (previous occupants were Maison Paul, Grayt Expectations, an estate agent and Stagg’s shoe shop). Tregelles includes a map dated 1850 showing the location. The Star (which for a while was known as the Salisbury Arms) is nearby on the opposite side of the road, helping to pinpoint the location. Middle Row was demolished in 1857, only 16 years after the almshouses were taken down.

Fuller’s Worthies (about 1650) states that the almshouses were ‘no doubt by him completely endowed; though now the almshouses are as poor as the almsfolk, the one needing repairing as much as the other relieving’. While no specific information has been found so far, it would suggest that the buildings were refurbished as they lasted for a further two centuries.

Tregelles records that Isaak Walton’s thatched house (described in the 1737 Vestry Book as Mr Plomer’s brewhouse) was next to The Four Feathers, and next to the thatched house were 5 almshouses (domos elimosinaris according to the rolls) provided by Richard Rich in 1440. In 1737 it was proposed to rent a house in Jno Street for 7 years, and Mr Plomer was to have the use of the almshouses. In 1834 the Commission reported they were in good repair and occupied by 5 poor families, some of whom were also in receipt of poor relief.

A document stored at HALS (ref DP/24A/18/22), dated 1835 but which may be May 5th 1830, concerns the Poor House effects sale. It lists 5 residences in almshouses, with their effects. It refers to the poor house, the almshouses and the workhouse, hence differentiating between the three institutions.

DP/24A/18/2/45, dated 17 Nov 1840, is a refusal of the application to the Commission by the Board of Guardians for the proposed sale of 5 almshouses in Hoddesdon parish.

The almshouses were sold in 1841 for £240 by order of the Vestry under the sanction of the Poor Law Board. Cussans notes they had become dilapidated. The proceeds were transferred to the general parish fund and the charity became extinct.

These almshouses were in use for four hundred years, yet very little has been uncovered about them.

The History & Antiquities of the County of Hertford, by Robert Clutterbuck
Printed by and for John Bowyer Nichols, 25 Parliament Street, London 1827