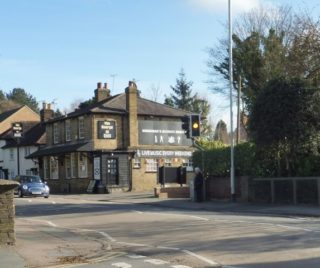 The George III now occupies the site once used by the almshouse. The railings to the right of the image are part of the Spital bridge. 2018
Colin Wilson 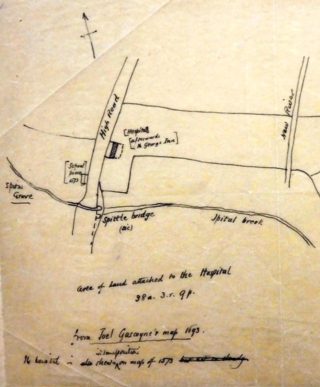 Part of a tracing of Joel Gascoyne's map. Note the varying spellings of Spital and Spittle.
Courtesy of Hertfordshire Archives and Local Studies ref DE/Hd/P7 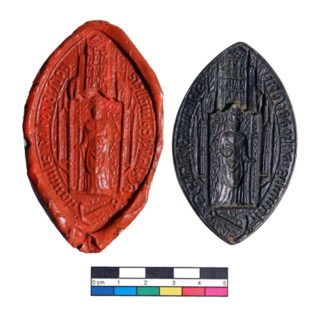 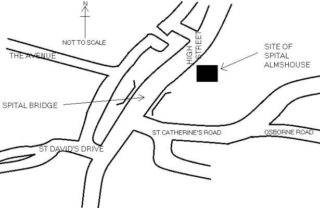 Sketch map showing the site of the almshouse or hospital. 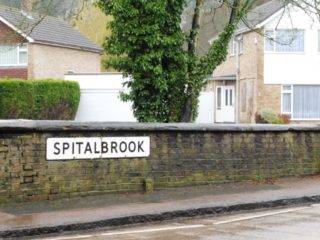 The sign on the Spital bridge, on the opposite side of the road to the almshouse site. 2018
Colin Wilson 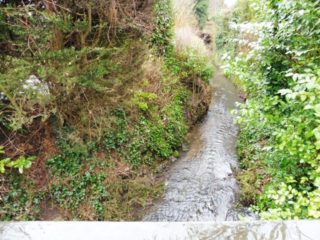 The Spital brook in 2018. Hardly a raging torrent.
Colin Wilson

The word hospital does not mean the same as nowadays; it referred more to caring for those in need for various reasons. In mediaeval times the care of the sick and poor was usually provided by the Church.

This institution was described as a lazar (leper) hospital, but a survey around 1569 refers to the 2 small rooms occupied by the poor; it wasn’t exactly a large establishment. It seems to have been in some sort of use from around 1390 till around 1575.

In the west of the parish, which is thickly wooded, runs the Ermine Street, a Roman way, which crosses the Spital Brook and passes through the Hoddesdon Woods. There is a tumulus at Hoddesdonbury on the south side of the road. The hospital of St. Laud and St. Anthony has left its name in Spital Brook, near which it stood.

A tracing of a 1693 map by Joel Gascoyne shows the site, mentioning it was the hospital, later the site of the George Inn. It also notes that ‘the hospital is also shewn in same position on map of 1573 but not so clearly’ and that the land attached to the hospital was 38 acres, 3 roods and 9 perches. On the other hand, Victoria County History says the land was only a few acres.

The site is now (2018) occupied by the George III public house.

Richard Rich would certainly have known of these almshouses had they existed in his day – he lived just up the hill. Tregelles p312 mentions that ‘among his numerous and minute bequests to religious houses and hospitals there is no mention of any in Hoddesdon, which helps to show that none existed at this time’. So one wonders why there are no references in his will. Rich built his own almshouses in 1440, scarcely 50 years after these. It could be they were provided for well enough so didn’t need his help, or he wanted to make his own statement. We will probably never know.

The earliest mention of this hospital is in 1390, when the Bishop of Ely granted indulgences for the poor and lepers of that house and of St. Margaret, Thetford. Apparently there was no foundation charter.

Hayllar pp 43-4 records: ‘It seems to have been intended for lepers in the first place, but there is no record that it was used as such except that Sir William Say left in his will some money for the Lazar House in Hoddesdon.

In a lease granted in 1561 by Lady Ann Bourchier, it is referred to as ‘the almshouses otherwyse called the spittel’. With the exception of Hoddesdon, which continued up to 1575 as a kind of almshouse, all the hospitals mentioned had disappeared before 1530, or survived only as chantries. While it seems to have been originally intended, in part at any rate, for lepers, in the 16th century it was a hospital or almshouse for poor men and women.

The Spital House fell into decay towards the end of the 16th century, and was then adapted for the use of the free grammar school founded by Queen Elizabeth by charter of 4 January 1559–60. The site then became The George Inn, later known as the Old George and in 2018 (at the time it was visited) it was known as the George III.

The warden or ‘guydor’ held the house on lease from the lord of the manor. John Jenkinson held this post shortly before 1518. William Thompson, master in 1518, obtained a fresh lease of the place to himself and his wife at a rent of 2 marks. He was succeeded in 1535 by Gregory Peryes. The house and its property were let in 1561 at 20s. a year for twenty-one years to William Smythe of Newington, who at once sold his interest to Robert Reve, a butcher, and by him the hospital with the government of its inmates was leased for 60s. a year to Thomas Jackson. On 22 April 1568 Jackson complained to Sir William Cecil that Reve did not, as he had promised, repair the hospital, which was in a ruinous state, and that he was making unreasonable waste of the woods belonging to the house. The survey made in consequence a few days later proves the truth of his statements: the two little rooms occupied by the poor people at night let in the rain, and the groves were much damaged by cattle.

As the possessions of the hospital consisted only of a few acres of pasture and wood, the poor there must have maintained themselves by begging; in fact, of the eight inmates six were absent at the time of the survey ‘gathering the devotion of the people.’ The number to be received was left to the warden’s decision, and the surveyors drew the natural conclusion that the founders had lately troubled themselves little about the management of the place. The hospital lasted but a short time longer, the building in 1573 being used for a school.

One of the two seals of the Hoddesdon Hospital, both apparently of the 15th century, shows that the house was also called St. Clement, so that there was probably at some time a change of dedication.

One of seals of this house, in the style of the 15th century, is a pointed oval, and represents two saints in a niche with heavy canopies and tabernacle work at the sides. The saint on the left, St. Antony, holds in his right hand a long tau cross, in the other a book, while at his feet is a pig; St. Laud, wearing mitre and vestments, holds blacksmith’s pincers in his left hand and a hammer in his right. In the background are sprays of foliage. Legend: SIGILL[UM] OSPITALIS SANCTI ANTONI LOCI DE HODSTUN. Another of the same shape and style also shows two saints under heavily canopied Gothic niches. The saint on the left is again represented with a tau cross in his right hand and a book in his left, but the pig is not shown at his feet. St. Laud, as before, holds a hammer, but in his left hand: his right is raised in benediction. In the base are two emblems, the anchor of St. Clement under St. Antony and a horseshoe under St. Laud. Legend: SIGILLUM HOSPITALIS SANCTI CLEMENT’ LOCI DE HODDESDON.

Images of the seals can be found in Victoria County History of Hertfordshire vol 4, as Hertfordshire Monastic Seals plate II, between pages 434 and 435. A copy of the second seal is kept at the British Museum. As at April 2018 it was not on display. The Museum reference is 1975,0601.7.

A presentment of twenty people forming a jury in 1595 gives this description:
‘Item, we find that a house in Hoddesdon yet knowne by the name of a spittle wch certen lande wood meadow and pasture thereunto belonging was tyme out of mynde oredained for the Releffe of the maymed lame and impotent people of the said towne of Hoddesden by Sr William Saie or his predecessors (as we think) for that the governor of those people (as it is said) at the appointm of his heries as the La. Bowcer (Lady Bourchier) to whom the said governor paid yearly a quitt rent of 26s 8d. And the poore to be relieaved ther were allwaies at the appointmt of the inhabitants of the said towne, but aboute the same twenty yeares paste by the consent of the right honourable the L. Burghley lord of the saide towne and wch the goode will of the saide inhabitants was changed to the maineteyninge of a free schole’.

History of Hoddesdon in the County of Hertfordshire, by J A Tregelles
Pub Stephen Austin & Sons Ltd 1908