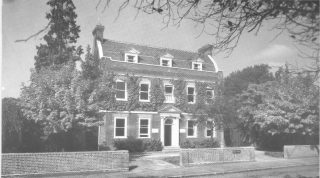 Lowewood is recognisable now as the Borough of Broxbourne’s museum, but it has a long history. Built in the mid-18th century, it was associated with the family of Quaker philanthropist John Warner, and has been both a private house and a library before its present use started. It received a grade II listing in 1963.

Much of the southern end of the High Street has been redeveloped in modern times, and Lowewood stands isolated in between the Civic Centre (now called The Spotlight) and health centre to the north and the police station to the south. In its day, however, it was just one of a number of imposing houses along that stretch of road, which included Rawdon House (still standing), Woodlands, the Grange, Yew House and Borham House next door to Lowewood.

The description in the original listing reads:

In fact, there is some speculation that the present house incorporated parts of an earlier building, since the rear is in a different style, with lower ceilings. The land had been known as Harveys as far back as 1570, and a man named Jasper Garnett had a house there in the later 17th century. The later Georgian house appears to have been unnamed until the early 20th century, when it acquired the name Lowewood, though it’s unclear where this derived from.

Until 1936, Lowewood was a residential property. Its early history is sketchy, though it’s known that it was owned by a druggist called Hugh Hughes, who died in 1785. A few years later, it was bought by the Whitelock family, and eventually sold in 1835 to John Warner and his son.

Warner’s main home was Woodlands, but Lowewood was next door to the house owned by the family of his first wife, Hester Borham, who was notoriously murdered by Thomas Simmons. Simmons was, in the end, hung for the murder of the housekeeper, not of Hester, since her family’s Quaker principles prevented them from giving evidence in a trial involving capital punishment.

Warner’s three unmarried daughters later occupied Lowewood, and one of these, Mary, is remembered as being “a real type of earlier Quaker ladies…she used at times the old Quaker forms of speech ‘thee’ and ‘thou’, ‘first day’, ‘second day’, etc, for the days of the week.”

By 1936, there was considerable controversy over the lack of adequate library facilities in Hoddesdon, and in that year Lowewood’s owner, Douglas Taylor, gave the house to the town for that purpose. For most of the library’s lifetime at Lowewood, the librarian was Edwin Paddick, who also built up a substantial collection of documents and artefacts. Paddick retired as librarian in 1963, but stayed on as curator of the Record Room till shortly before his death in 1976.

In 1977, a new purpose-build library was opened in the town centre. The Council had originally planned to sell Lowewood, but in 1982 it was reopened as a museum. Paddick’s collection formed the nucleus of the collection, supplemented by items from all over the Borough.

Lowewood Museum is thriving today, with a substantial collection and frequent special exhibitions. You can find details of what they offer on their website. And, if you visit, you have the added bonus of being able to enjoy this fine grade-II listed Georgian house as you wander around.

A non-original feature of Lowewood is statue of the Samaritan Woman in the back garden. Originally erected by Sir Marmaduke Rawdon in 1622 in the High Street as a water fountain, the statue was removed in 1826 and thereafter moved around to various locations, often kept in storage.

In 1986, after the old council offices where she’d been were demolished, the Samaritan Woman was re-erected in the gardens of Lowewood, and is still there.