You are here: Home>Herts history>People>Famous / Infamous>Murders at Borham House and the Execution of Thomas Simmons

Murders at Borham House and the Execution of Thomas Simmons 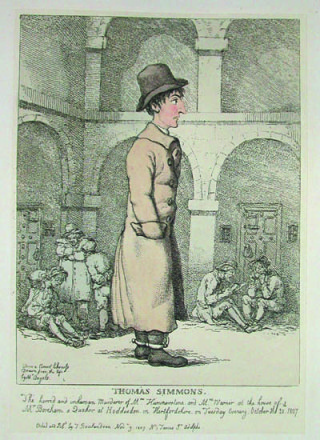 At the southern end of the High Street, a house called Borham House used to stand next door to what is now Lowewood Museum, roughly where the health centre now is. An attractive, medium-sized house, it became in 1807 one of the most notorious murder sites ever in Hoddesdon.

On 20th October 1807, Mr and Mrs Borham, prominent Hoddesdon Quakers, were being visited by their daughter Esther (sometimes referred to as Hester), wife of the businessman and philanthropist John Warner, who was pregnant with their fourth child.

The Borhams had recently dismissed a young servant named Thomas Simmons, who had apparently shown himself to have a violent temper. He’d courted a fellow servant, Elizabeth [Betsy] Harris, but Mrs Borham had warned her about Thomas, and she’d eventually rejected him. As far as can be judged from the contemporary accounts, this appears to have been motivated by genuine concern for the woman, rather than any attempt to control her servants.

It’s not known exactly how Thomas reacted to the rejection, but the fact that he was shortly after dismissed suggests that he didn’t take it well, and there are suggestions that he’d previously threatened Esther. Nevertheless, he was subsequently taken on by the brewers Christie & Co.

The Evening of the 20th

That evening, Mr and Mrs Borham were hosting both their daughter and a neighbour called Mrs Hummerstone*, housekeeper at the Black Lion Inn (now the Star). After he’d finished work that evening, Thomas returned to Borham House and forced her way in. By the time he was confronted, he was armed with a knife, though it’s not clear from the accounts whether he’d brought it with him or picked it up in the house.

He went to the kitchen and confronted Elizabeth, who managed to escape him. Confronted by Mrs Hummerstone, he stabbed her in the jugular and slashed her throat open, then ran into the parlour, where he attacked Esther. The account says that,

without giving her time to rise from her chair, he gave her so many jabs to the jugular vein and about her neck and breast , that she fell from her chair, covered with streams of blood, and expired.

Thomas also attacked Mrs Borham and Elizabeth, who had heard the screams, although neither was fatally injured. He then ran off, knocking over Mr Borham, who was trying to stop him. According to Thomas’s later account,

when he had got Betsy down, he heard something fluttering over his shoulders, which made him get up and run away.

He apparently interpreted this as an angelic intervention.

Thomas was found and arrested hiding nearby in a cattle barn. His trial was held at Hertford on 4th March the following year, where he was tried only for the murder of Mrs Hummerstone. This was because, as Quakers, the Borhams refused to give evidence in a capital trial, even though one of the victims was their daughter.

According to contemporary accounts, the Court House

was uncommonly crowded with vast numbers from London, persons who had knowledge of the different parties, and many from adjacent villages.

Since Thomas had already confessed his crime to various witnesses, the trial was largely a formality.

The Learned Judge with his usual formality proceeded to pronounce the awful sentence, which was to be hanged on Monday next, and his body to be anatomised. He heard the sentence with great indifference and walked coolly from the bar.

He was duly hanged publicly on 7th March, with a large crowd watching.

Little is recorded of John Warner’s role or reaction. As a Quaker, he may have agreed with the Borhams’ stance on not actively pursuing the conviction of his wife’s murderer, but his feelings can only be guessed. However, four years later he married Sarah Borham, Esther’s sister. They were married for forty years, and had eleven children, in addition to the three John had with Esther.

* Although she’s referred to as “Mrs”, the Vestry minutes describe her as a spinster, so it may have been a courtesy title as a mature woman.

Hayllar, H.F., The Chronicles of Hoddesdon: From the Earliest Times to the Present Day, 1948, Thomas Knight & Co. Ltd