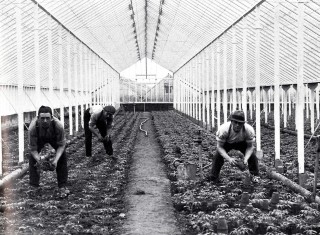 This image is probably one of the greenhouses of Mr. MacFarlane’s Pitfield Nursery, in Nursery Road. The Kelly’s Directory for 1945 lists a dozen nurseries in the Ware and Stanstead roads alone and by 1950 Hoddesdon was one of the main centres of marketing gardening in the Lea Valley.

After the Second World War, many Italian immigrants were employed in the greenhouses and many went on to rent or own their own nurseries, and to succeed in other local businesses.

In the past 33 years, competition from European imported vegetables and salads has led to a rapid decline in the industry and there are no nurseries left in Hoddesdon itself.