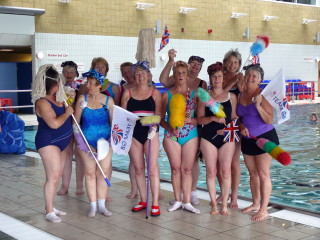 The Aqua Mops
The Life Guard 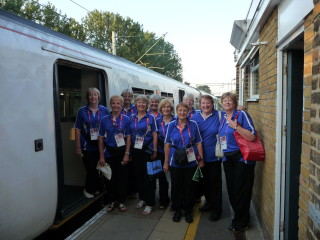 Ready for Action
A passenger 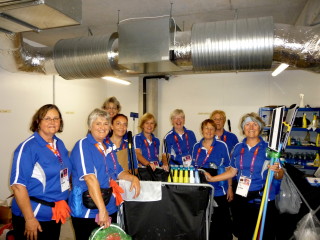 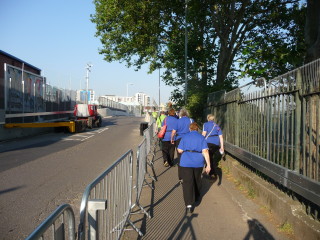 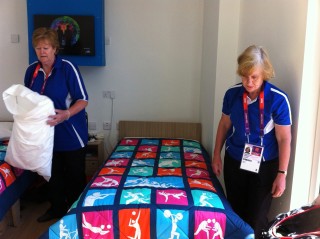 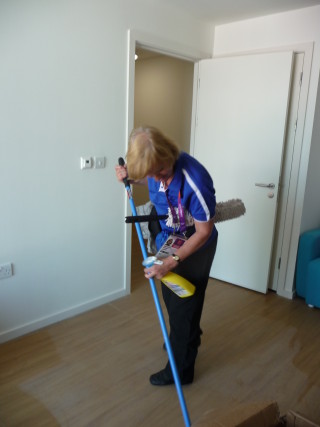 A new role for this doctor!
Jasmine 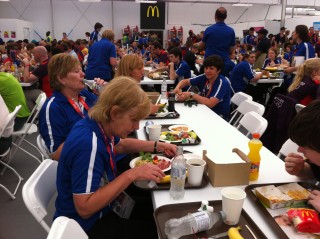 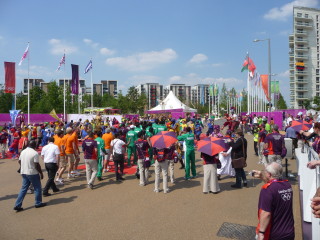 Welcoming an Olympic Team to the village
Jasmine 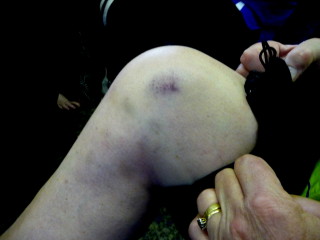 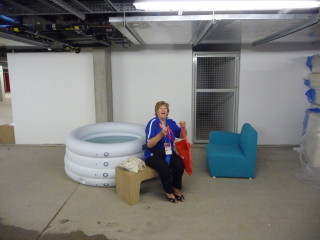 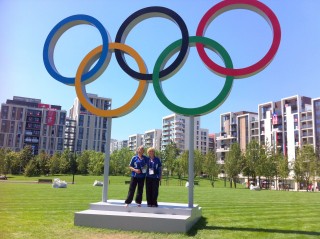 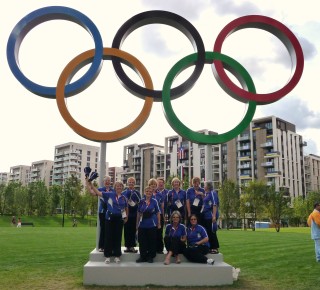 Our last day
A passerby

The Aqua Mops clean up

Blisters, Bruises, Scratches, Rashes. This was not what we were expecting when a group of eleven retired or near retired ladies who regularly swim at The John Warner Sports Centre in Hoddesdon took up Rotary’s opportunity to be part of the Olympic Scene.

Rotary is a world-wide service organisation whose motto is ‘Service above Self’. When I first heard that we in Rotary (I am a member of the Rotary Club of Hertford Shires who met for breakfast on a Wednesday morning) were to be given the chance to raise some money for charity by cleaning the Olympic Village I thought I could do this. For once it was a chance to raise money without asking for sponsorship.

We had to get teams together and each team would be lead by a Rotarian. I was lucky that I had a group of very able friends whom I saw every week at the John Warner Aqua Classes (hence the name Aqua-Mops) some of whom had already helped me with my Purple Pinkie Project when Hoddesdon was turned purple to raise money and awareness of Rotary’s Polio Eradication Programme.

This group was made up of retired teachers, nurses, a doctor, a company director and a health visitor. Last September when I put the idea forward to them it was met with a variety of reactions. Some said a definite ‘No’, some an enthusiastic ‘Yes’ and others dithered on the edge waiting to see what would develop.

Nothing much happened for months and for me this was a very difficult time as I had to maintain everyone’s enthusiasm for the project.   We all had to fill in very a detailed document and submit a photograph – this was for our CRB check & accreditation.   Everything about the Olympics seemed to be taking forever but this was due to the very tight security checks that needed to be made.

Eventually we were given a date to travel to Star Lane to collect our accreditation passes. By this time one person had dropped out and we were a team of eleven. You will see that everyone involved in the Olympics wears one of these around their necks. The code on the bottom tells security which section of the Park or Village you are allowed in. We had an R on ours which meant Residential although when we first got it we thought it stood for Refined.

The company ‘Cleanevent’ had won the cleaning contract in Sydney Australia and in Beijing & one of their managers was a Rotarian. To get the contract they had to show that communities would benefit so it suited both parties as Rotary ticked the boxes that Cleanevent required to win the contract.

On July 23rd, tired from clock-watching all night in case we missed the alarm, ten excited but anxious Aqua-Mops met at the station at the unearthly hour (for us retired ladies) of six-ten a.m. For the first day we were told to check in at 7.30a.m. but to allow at least 45 mins to clear security. As it turned out the army had been brought in and we were cleared through in no time at all.

Then began the long trek around the perimeter of the village to our assigned place of work. It was this long walk (15 mins at least) that finished us off at the end of our 8 hour shifts. Only athletes & officials have transport around the village – workers walk! For us it was block S1. We had no idea what S1 was or where it was but that first day we did have a guide. Blocks are S, H & C and this stands for Sea-side, Countryside & Heritage? Can’t see the thinking behind these names except for heritage as from the blocks of flats neither the sea-side or countryside can be seen.

We were taken to the underground car park which had been sectioned off into laundries, admin, 7 team offices & ‘physio’ areas complete with couches & ice pools and the cleaning area for the cleaners and equipment. It was here that we were issued with our unbranded uniform. ‘Cleanevent’ was not a sponsoring company so no logos could be worn. This was very hit & miss as some of us got trousers to fit, others didn’t, some got bum-bags whilst some of my team had to clean with their own bags hanging round their necks. Fortunately we had been pre-warned so only had little bags.

After the induction – a short video on what chemicals to use and where & how to make hospital corners - we were split up into teams with a full-time team leader. Each team leader was then accountable to the floor manager and they in turn to the block manger. We were at the bottom of the heap and answered to everyone. I had already negotiated that my group would always have at least one other with them and this was adhered to.

Off we went – collected the cleaning trolley and made our way to the assigned side of the block. Each block in the village surrounds a quadrangle. That first day was dire. The corridors leading from the lifts have flats on both sides. They have no natural light and, at the moment, no air conditioning. It was like stepping out of the lift into a sauna. The flats were also very hot and none of the bathrooms had any natural light or working extractor fans. By Friday I was wearing a sweat-band to keep the perspiration out of my eyes.

Being experienced ‘housekeepers’’ we soon found our team strengths so some became bed makers (hospital corners essential) – good job we had two retired nurses in the group. Our other duties were ‘hoovering’, dusting, wiping, re-cycling and the dreaded bathrooms. This onerous duty mostly fell to me and I never thought that I would say that I liked a shower curtain but my heart sank every time I entered a bathroom and it had a shower screen as this not only had to be cleaned on both sides but also polished. Cleanevent was very insistent on final appearances and I am now extremely adept at folding the end of the toilet rolls into a little point.

We struggled with the heat, the late lunch hour – although this varied – but one day it was 1.30p.m. As we had breakfast at 5.30 a.m., started work at 8.00 a.m. & worked through without a break it was a long time without food and we did actually lose weight!! We also struggled with the sheer amount of physical work expected from us. There was no time for lingering as schedules had to be met.

Would we do it again? Well I can’t speak for the others but I’m really glad I did it. We had been asked not to try to socialise with the athletes as this was their home for the duration of the games but obviously we would say ‘good morning’ if they were in the room. We had mixed reactions from the different groups; some ignored us whilst others presented us with their badges & had their pictures taken with us. You never knew who would walk past you.

It has certainly changed our perspective of the games as now we follow the athletes whose rooms we have cleaned, that is except if they are challenging a Brit. During one lunch break I went around the village and saw a welcome celebration. This is performed by volunteers from the National Youth Theatre & through dance & music they welcome each team to the village. It was brilliant.

When my Rotary club (Hertford Shires) eventually received the money it exceeded £3600 and went to the three nominated charities Polio Eradication, Herts. Carers Bereavement Support and ‘The Rotary Foundation’ who each received £1000. The remainder bought a Shelter Box.  It challenged us greatly, our physical strength, our personal relationships & our health. I think we definitely got Gold Medals all round.