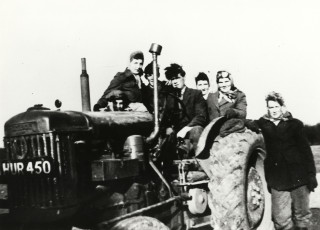 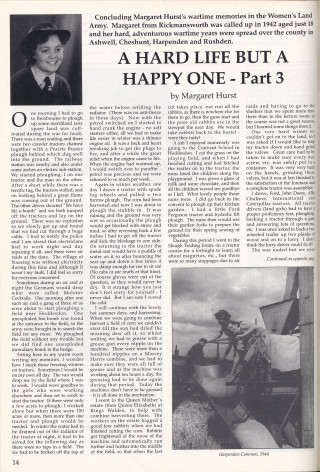 One morning I had to go up to Broxbourne to plough up some marshland (any spare land was cultivated during the war for food). There was a man waiting and there were two crawler tractors chained together with a Prairie Buster plough behind which dug well into the ground. The railway station was nearby and also under some arches an electric sub-station. We started ploughing, I on one tractor and the man on the other. After a short while thee was a terrific tug, the tractors stalled, and on looking behind a great flame was coming out of the ground. The other driver shouted “We have hit a bomb” and we both jumped off the tractors and lay on the ground. There was no explosion so we slowly got up and found that we had cut through a huge cable. I had to notify the police and I am afraid that electricians had to work night and day repairing it all, and there were air raids at the time. The village of Nazeing was without electricity during this time and although it wasn’t my fault, I did feel so sorry for everyone concerned.

An unexploded bomb in a hedge

Sometimes during an air raid at night the Germans would drop what where called Molotov Cocktails. One morning after one such air raid a gang of three of us were about to start ploughing a field near Hoddesdon. One unexploded fire bomb was found at the entrance to the field, so the army were brought in to search the field for any more. We ploughed the field without any trouble but we did find one unexploded incendiary bomb in the hedge.

A back and heart breaking job

Sitting here in my warm room writing my memoirs, I wonder how I stuck those freezing winters on tractors. Sometimes I would be on my own all day. The van would drop me by the field where I was to work. I would wave goodbye to the girls who were working elsewhere and then set to work to start the tractor. If there were only a few acres to plough, I worked alone but when there were 100 acres or more, then more than one tractor and plough would be needed. In winter the water had to be drained out of the radiator of the tractor at night, it had to be saved for the following day as there were no taps in a field. The ice had to be broken off the top of the water before refilling the radiator. (There was no anti-freeze in those days). Now with the petrol switched on I started to hand crank the engine- no self starters either, all we had to make life easier in winter was a thinner engine oil. It was a back and heart breaking job to get the plugs to fire, and after a while the great relief when the engine came to life. When the engine had warmed up, I would switch over to paraffin- petrol was precious and we were rationed to so much per week.

No cabs or muffs, and ‘of course gloves were out of the question, as they would never be dry’

Again in winter weather, one day I drove a tractor with spade lug wheels and pulled a two furrow plough. The corn had been harvested and now I was about to plough the stubble in. It was raining and the ground was very wet so occasionally the plough would get blocked with straw and mud, so after reversing back a few inches I had to get off the tractor and kick the blockage to one side. On returning to the tractor the metal seat would have a puddle of water on it so after bouncing the seat up and down a few times it was damp enough for me to sit on! (No cabs or ear muffs at that time). Of course gloves were out of the question, as they would never be dry. It is strange how you just don’t feel sorry for yourself- I never did. But I am sure I cursed the cold.

‘you just don’t feel sorry for yourself- I never did. But I am sure I cursed the cold.’

I will continue with the lovely hot summer days, and harvesting. When we were going to combine harvest a field or corn we couldn’t start till the sun had dried the morning dew off it, so whilst waiting we had to grease with a machine. There were more than a hundred nipples on a Massey Harris combine, and we had to make sure they were all full of grease and as the machine was working about ten hours a day, the greasing had to be done again during that period. Today the machines don’t have to be greased- it is all done in the mechanism.

I went to the Queen Mother’s estate (then Queen Elizabeth) at kings Walden, to help with combine harvesting there. The workers on the estate bagged a good few rabbits when we had finished cutting the corn. Rabbits get frightened of the noise of the machine and automatically run further and further into the middle of the field so that when the last cut takes place, out run all the rabbits, as there is nowhere else for them to go, then the guns start and the poor old rabbits are in the stewpot the next day. We would take rabbits back to the hostel- they were tasty!

A trip to the Convent School, Hoddesdon

‘what lovely people those nuns were’

A job I enjoyed immensely was going to the Convent School in Hoddesdon. I cut the grass on the playing field, and when I had finished cutting and had hitched the trailer on to the tractor, the nuns lined the children along the playground. I was given a glass of milk and some chocolate, and then all the children waved me goodbye as I left. What lovely people those nuns were. I did go back to the convent to plough up their kitchen garden. I had a little Ford Ferguson tractor and hydraulic lift plough. The nuns then would use their garden forks to prepare the ground for their spring sowing of vegetables.

During this period I went to the Slough Trading Estate on a tractor course for a fortnight to learn all about magnetos, etc., but there were so many stoppages due to air raids and having to go to the shelters that we spent more time there then in the lecture room, so the course was not a great success, but I learned some things from it.

One very hard winter we couldn’t get on to the land, so I was asked if I would like to strip my tractor down and hand grind the valves. Great care had to be taken to make sure every nut, screw, etc. was safely put in a container. It was very very hard on the hands, grinding those valves, but it was at last finished to the satisfaction of the foreman and a complete tractor was assembled.

‘I was once asked to back a two wheeled trailer up two planks of wood and on to a lorry. I don’t think the lorry driver could do it!’

I drove, Ford, John Deere, Allis Chalmer, international and Caterpillar tractors. All tractor drivers (land girls) had to have a proper proficiency test, ploughing, backing a tractor through a gate and answering a lot of questions etc. I was once asked to back a two wheeled trailer up two planks of wood and on to a lorry. I don’t think the lorry driver could do it!

The war ended but we were asked to stay on for a time so I did, as I loved the life and I left in January 1948. At this time there were Victory parades in every town. In the Watford Victory Parade I drove a tractor and a trailer which was decorated with farm implements, straw bales etc. and a number of Land Army girls holding pitchforks etc. It was fun and of course we loved the cheers we got, as we paraded through the town.

I did enter one ploughing match and came third!

Towards the end of my time in the W.L.A, in 1947, I had a most pleasurable job. I went to do some ploughing in the grounds of a beautiful house near Wheathampstead. The house was called Bride Hall and was owned by Lady Lenanton, President of the Hertfordshire British Red Cross Society at that time. I was treated with such kindness there. A member of the household stuff brought me out tea and coffee on a tray, and was so friendly it was nice to get back to civilisation after roughing it for so long. My tractor broke down whilst I was there, so I went to the house to ask if I could use their telephone. I left my dirty boots outside and entered the house in my socks. After phoning, I was invited into the kitchen and served up a delicious plate of egg and chips. There were two Dalmation dogs, very friendly too.

I think it was in September 1947 when I received a letter from the W.L.A Headquarters inviting me to drive a tractor in the Lord Mayor’s Show, the theme that year being “The Country Comes to Town”. There were three of us representing Hertfordshire and a couple of weeks before the show we went to the ford factory at Dagenham. We were each allocated a new blue Ford Major tractor, (I suppose there were over 50 Land Girls there from different counties taking part). We had to test drive in convoy around the roads there.

‘All went well on the day. It was a marvellous experience to be cheered and clapped all along the route.’

The afternoon before the Show we went again to Dagenham and drove the tractors from the factory to London Wall and left them there overnight. We had a police escort on motor cycles. We had to drive on part of the way in the dark so it was quite a headache for us and the police/ I am sure they were dreading the journey back! All went well on the day. It was a marvellous experience to be cheered and clapped all along the route. I had a trailer loaded with straw hitched to my tractor. Other girls towed all sorts of implements used on the farm. After the Show we drove back to Dagenham without mishap and a Ford representative thanked us for our services and presented each of us with a powder compact. It was made of a sort of plastic so didn’t last too long.

Well, here I am today, forty years on. My husband and I still meet five Land Girls from Berry Land hostel, and their husbands, twice a year. We have some good laughs about the old times. We always phone another friend from the hostel, who emigrated to Canada after the war. We phone her each time we have a good get-together and she has been over twice and stays with us all. Last time she came to England, we seven girls had a day in London, and went back to Trafalgar Square where we always went during and after the war for a day out. We were met by a reporter from the London Standard newspaper and had a good write-up and photograph put in one of their editions.

I was still involved with tractors as I worked for 11 years for the British Agricultural and Garden Machinery Association, until I retired in December 1988.