The Parish Church of St Catherine and St Paul 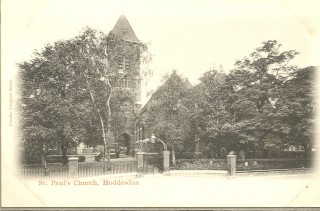 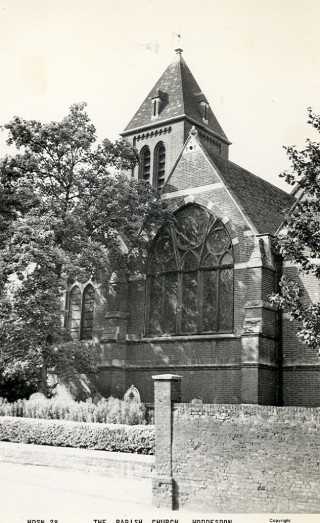 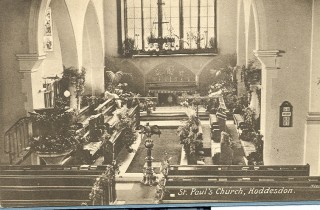 Unlike the other parishes in the Borough, the parish church of Hoddesdon only goes back to the 18th century.  Nevertheless, the history of worship in the town goes back much further and is quite a tangled story.

Although an established community, Hoddesdon didn’t become a parish until the 1840s. Until then, it was divided between the parishes of Broxbourne and Amwell, the boundary roughly following the line of Lord Street.  In 1336, a parishioner named William de la Marche obtained permission from the king to build a chapel, which stood where the Clock Tower is now.  Since the permission specified building the chapel “anew”, it can be assumed that it replaced an earlier building, but no record of this earlier chapel survives.

This building, dedicated to St Katherine, remained in use until the 18th century.  It may have originally served as a place of worship for pilgrims heading for the shrine of Our Lady at Walsingham, but it was certainly later a chapel of ease for the people of Hoddesdon.

By 1700, the building had become dilapidated, but a decision was taken to sell one of its bells to buy a new clock.  This gave rise to a local rhyme:

Parson Davis and Farmer Lock
Sold their bell to buy a clock.

This may refer to the Rev. Hatton Davies, vicar of Great Amwell, but the identity of Farmer Lock has never been established.

In 1732, Robert Plomer, a prosperous local businessman who had inherited Rawdon House by marrying into the Rawdon Family, built a new chapel of ease. The reason for this is unclear, but it seems to have stemmed from a quarrel with Phineas Rothwell, vicar of Broxbourne.  Plomer’s building now forms the nave of the parish church.

There appears to be some confusion in the records, due to the fact that the two buildings were both referred to simply as “The Chapel”.  Some accounts claim that Plomer restored the old chapel, but this seems unlikely.  When it was demolished in 1835, to be replaced by the Clock Tower, it was described as “misshapen by age”.

Plomer’s chapel remained in private hands until 1820, when it was purchased by the Church and consecrated in 1823 by William Howley, Bishop of London, who later, as Archbishop of Canterbury, crowned Queen Victoria.

The Parish of Hoddesdon

The anomalous position of Hoddesdon had been noted as early as the Commonwealth period, when there were plans to form a parish, but these were shelved after the Restoration.  This move was revived in 1843, when it was agreed to create a parish of Hoddesdon.  The following year, the burial ground was consecrated, formally making Hoddesdon an ecclesiastical district.  It officially became a parish in 1856.

The seating capacity, however, was inadequate, and a parish meeting in 1860 decided to build a new church.  However, sufficient subscriptions couldn’t be raised to fund this, so instead the existing building was extended by adding a chancel and north and south aisles.  The work was complete by 1865, and the opening sermon was preached by the Bishop of Rochester.  A tower was added in 1887, with a peal of eight bells donated by the Christie family in 1901, and the interior was modernised in 1976.

From the founding of the parish till 1927, the church had only two vicars: Richard William Morice, who died in 1881, and Philip Esme Stuart Holland, who retired in 1921.  Both were very popular locally, and Mr Holland was a champion of inter-denominational links long before this became popular.

At the ceremony to dedicate the peal of bells, the church was formally dedicated to St Paul, perhaps influenced by the already-existing Pauls Lane nearby.  In 1976, it was rededicated to St Catherine and St Paul, and remains so today.

Hoddesdon Parish Church may not be the most venerable or architecturally interesting in the district, but it’s history is tied in with the town as firmly as any mediaeval church, and it deserves its grade 2* listing.