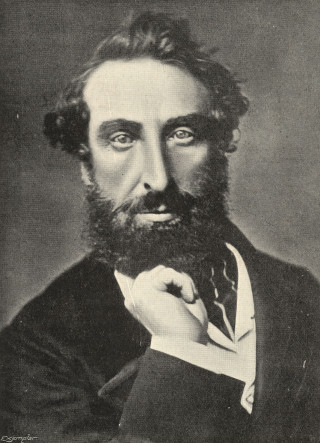 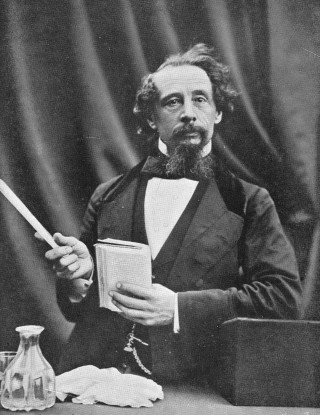 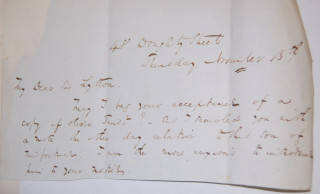 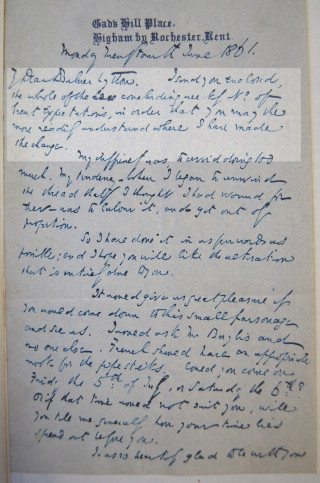 In the Knebworth House archives held at Hertfordshire Archives and Local Studies, there are 120 letters from Charles Dickens to Edward Bulwer Lytton, Ist Lord Lytton of Knebworth (1803 – 1873) covering the 1830s to 1870.

Bulwer was a distinguished novelist and poet and politician. Among his best works are the celebrated Last Days of Pompeii and Eugene Aram and Dickens greatly admired his work although now, it has fallen out of fashion.

They met in the 1830s at the house of William Harrison Ainsworth, an historic novelist.  Though from vastly different backgrounds, Dickens and Bulwer quickly became great friends.  This friendship was to last for the rest of their lives and was one of mutual literary admiration.

In 1850, at Bulwer’s suggestion, Dickens bought his star-studded amateur theatrical company to perform at Knebworth.  It was during these theatricals that they evolved the idea of mounting further performances to raise money to establish a charity to help impoverished authors and artists.  The Guild of Literature and Art was founded.  Bulwer wrote a comedy for Dickens and his troupe to perform – he was delighted with it and called it Not So Bad as We Seem.  It was a huge success and was performed all over the country and in front of the Queen and Prince Albert, who donated £150 to the cause.    Dickens gave the proceeds of Bleak House to the Guild and Bulwer made a gift of free land in Stevenage from his estate to build cottages near the Six Hills, which due to red-tape were not opened until 1865.  Disappointingly, the scheme failed because there was a lack of support from the people it was intended to support.  The cottages (which stood near the new town square) were demolished many years ago.

The last years of Bulwer’s life were restless and he suffered from ill-health and depression.  One of his last public appearances was at a farewell banquet held for Dickens before his second and last trip to the United States.  He died in Torquay on 18th January 1873 and is buried in Westminster Abbey.

Dickens asks Bulwer to accept a copy of Oliver Twist [undated] c1837 – 1838 (D/EK/C12/1)   Not yet on too familiar terms, Dickens writes to ‘My dear Sir Lytton’ from his home in Doughty Street, eagerly asking him to accept a copy of Oliver Twist and refers to Oliver as ‘this son of misfortune’. Dickens would not be aware that he had created the novel which would be synonymous with his name more than any other.  It was well received, despite criticisms for introducing criminals and prostitutes.  We do not know what Bulwer’s reply said but the story of the orphan boy from the workhouse continues to endure.

Changing the end of Great Expectations (D/EKc12/49)   Bulwer enjoyed the company of Dickens, who made a visit to Knebworth House in 1861, bringing with him the final proofs of Great Expectations for Bulwer’s comments.  He thought the bleak and unhappy ending would not please the public and persuaded Dickens to alter it to a happier one in which Pip and Estella end up together.