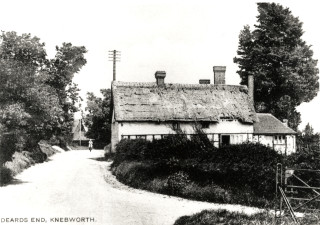 This is an extract from an oral history conducted by Ann Judge from interviews with 12 local residents.  It summarises the memories of some of the local people from the 1920’s to the 1960’s.

There were six farms in and around Knebworth – Swangley’s in Swangley’s Lane, Gun Farm in Gun Lane, Deards End in Park Lane, Lodge Farm and Manor Farm in Old Knebworth and Nup End Farm.

Eileen Grosse was friends with Bill Hodge who ran Nup End farm and as I say, we used to go up to the farmhouse, in the evenings.  Sit and chat, and talk.  Men had a little drop of scotch.  Oh, he was a lovely man.  Maud Kirk –  I mean the farm up here now is an industrial site, which I’d never thought I’d live to see.  I mean Mr Hodge that had that farm, he came from Scotland.

Vic H says,  well there was Swangleys Farm, up Swangleys Lane which I think was Mr Wallace, and he had, I think it was a mixed farm of arable, and he had a milking herd. And then there was Muirhead’s  farm, up at Park Lane there.  Bob O also remembers, I mean Deards End Farm and Manor Farm of Knebworth were combined, that was run by two brothers, Malcolm and Jim  Muirhead.

The farms had a mixture of livestock and crops, with the milk being provided to the village by the various milking herds:  Maud Kirk – Yes, we used to have to go up and get our milk from the farm.  We used to carry it in a can.

Bob O – I mean in those days, they grew wheat, barley, oats, and sugar beat, hay, mangles, potatoes.  Potatoes were very important in this area. And in those days all the farmers then had a herd of dairy cows. Deards End Farm , which is, as you know, all houses now, they distributed the milk all through the village, and they had two horse floats, and a van, and they bottled the milk and they distributed it round the village.

Alf W – Them days, they used to grow the beans and tares and oats and they used to thresh it and blow it up into this big silo and it used to rot away and that was cow food.  And it was very rich.  And you used to get very good milk from that.  And they also grew kale, and mangles, which they put in the meadow for the cows to eat. But today, you never see the cows out, well there’s no dairy farms left here now.  Well we had five dairy farms, there’s not one left. I mean a milkman used to come round with a trap, with a big churn on it and he used to come to the door with a bucket with the milk, and we used to leave the jugs out and he used to pour the milk in the jugs them days.  But it’s all altered now.  Muirheads, at Deards End Farm, he had three milk floats going out there.  And all the surplus milk used to be put in churns and it used to be put on the horse and cart and brought down to the railway station, on the platform, and it used to go in the trains, up to Finsbury Park to Express Dairies.  That was all the surplus milk, from what they had, which was a lot them days.  Because Manor Farm, there was a big herd at Manor Farm there.  And all the cows when they let ’em out used to go into the Park and there’d be kale, which they used to cut and spread out, and the cows used to eat the kale, which used to enrich the milk.  I mean the milk was a lot better them days, than what it is today, you know.  It was very, very good. A lot of time, if you left it in the jug, you’d get loads of cream on the top.

Paid work and entertainment for children

The farms also provided both paid work, and entertainment for the local children.  Vic H recalls that when there was harvest time Ted and I went down to help when they were cutting down, in the Watton Road and some of the fields there, and at the end of the day the farmer gave me a rabbit, and when I got home my elder sister wouldn’t allow me to bring it indoors, but luckily there were two elderly maiden ladies who originated from the Orkneys, farmers daughters, who lived next door to us, so I took it in to Miss Gaddie and she skinned it and dressed it ready for Mum to put in the pot.  But, no, harvest time we were always out and it was good fun.

Alf W also spoke of when I was a schoolboy, my summer holidays were spent on the farm with my grandfather.  ‘Cos, if you know, today, they cut all the corn with a combine, but them days they had three horses go round the fields with a binder, and it used to throw the sheaves out tied up, and you used to have to stack ’em up to dry out.  And then they’d go along with a horse and cart, and they used to throw ’em on with a fork, take them to the corn stack, and they used to stay there till they’d threshed out.  But, as you say today, where they had twelve men on a farm, now you only need two tractor drivers today.

Maud K’s grandmother used to work on the fields; they used to go out what they call stone picking.  ‘Cos they cleared the stones, lots of men, women used to do that years ago.  They used to wear, I can see her in an old sacking apron.  And they used to pick all the stones up off the field.

Farms always attracted gypsies and Knebworth was no exception.  Bob Overman spoke of the gypsies during the war, because of the potatoes and the winter work you know sugar beet, potatoes, and all this sort of thing, there was always a strong community of gypsies, who congregated in Knebworth, every autumn.  And of course what happened was that the start of the war, they could no longer travel because they had to register for their rations, they had to be registered at butchers and grocers and all this sort of thing.  And therefore they stayed and they always used to stay up on the fields up behind Deards End Farm, up towards to golf links.   And there was quite a community up there.