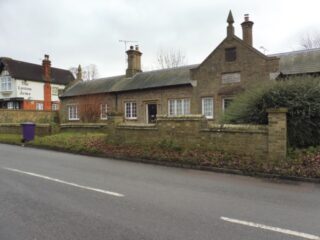 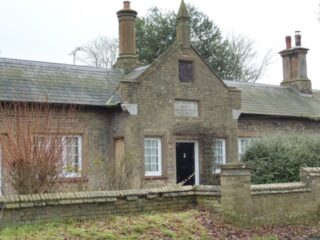 Lytton almshouse, the centre section. The dedication stone and Lytton family arms can be seen on the gable end. Jan 2017
Colin Wilson 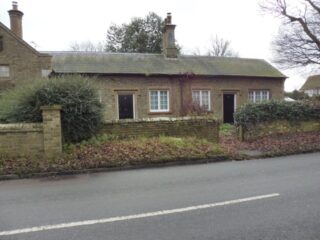 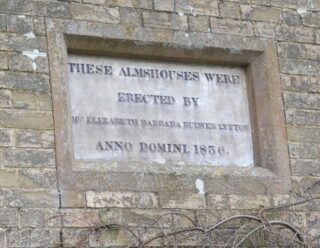 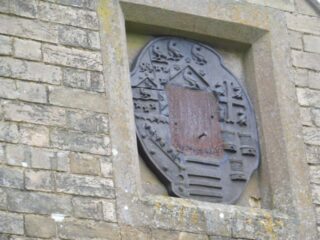 Kath once lived in the Knebworth almshouse with her grandmother. She said the facilities when she lived there were quite basic, with a bucket toilet in the shed. Ann Judge recorded Kath’s memories in an article published on the Herts Memories website in June 2009. When I visited in Jan 2017 the landlord of the Lytton Arms indicated they weren’t particularly modern then. One of the residences was advertised for rent in May 2020. Pictures on the agent’s website showed the interior to be small but neat and tidy, with a pleasant view over the fields.

Elizabeth Barbara Warburton-Lytton had inherited the Knebworth estate in 1810. She married William Bulwer, the family name becoming Bulwer-Lytton. It was in 1836 that Elizabeth erected 5 almshouses for old and deserving people of the parish. They were unendowed but were supported by the Earl of Lytton. This was 34 years before the Married Women’s Property Act.

It appears that support continued from the Knebworth Estate. In 2017 they were not noted as being affiliated to the Almshouse Association, nor were they registered with the Charity Commission.

The construction was a yellow gault brick, with tiled roofs, with the Lytton arms and date stone on the centre gable. They were in the style of traditional Tudor style almshouses. The building was grade II listed by Historic England in 1984, the reference being 1347325.

A few standard death notices appeared in the newspapers, which simply note the name and age. The only unusual one referred to John Chamberlain, aged 75, a labourer residing the Almshouses, Knebworth. He was found drowned in the pond near the Node Farm (to the west of the almshouses) in 1879.

An 1874 Herts Advertiser article mentioned ‘a pretty Gothic structure, in variegated brick and stone, which might be an almshouse, a school, a hospital, or a lunatic asylum, but which is really empty wasting evidence of a miserable failure of philanthropy’. If true, this is a sad reflection of a failed attempt in 1865, this time by Lord Lytton and Charles Dickens, who founded The Guild in nearby Stevenage.

However, if it was a failure, how come it was used as an almshouse for 184 years either free or subsidised, and the buildings still lived in? The last of the estate retainers from the present Lord Cobbold’s generation died in 2019. The building was then let commercially.

As with a number of other almshouses, pension provision, changes in the law, the mixed blessing of listing (protection but with limitations and higher repair costs) and the availability of social housing combined to make the decision to rent on a commercial basis. My thanks are due to Jill Campbell (Knebworth Estate archivist) for supplying information for these last two paragraphs

HALS DE/X1009/1/4. John Norman, from Potters Bar, painted a number of watercolours between 1980 and 2007, including the Almshouses, Knebworth