Origins of places and streets 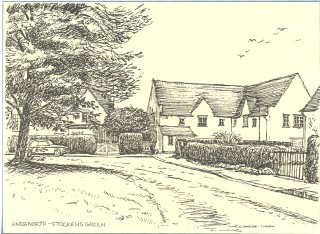 Hogsnorton is just beyond Old Knebworth and Nup End, in Sally Deards Lane.  Ros Adams says that there are many stories about Sally Deards and Hogsnorton, many of them highly fanciful.  Sally Deards was said to have been a witch in the 17th or 18th century who was chased by a gamekeeper and changed herself into a deer!  The field in front of the cottages (known as ‘The Prairie’ on account of its size) was said to have a disappearing hostelry known as the ‘Seven Hammers’.

Much more likely was the origin of the name Hogsnorton: the place (north of the village) where the pigs were kept on account of the north wind which blew the smell away from the village.  Interestingly, hogsnorton is a slang word for a glutton.

In the 1930s Gillie Potter made a series of humorous radio broadcasts from the fictional village of Hogsnorton.  Apparently the local postmistress contacted him and he visited Hogsnorton , dubbing the occupant of Hogsnorton Cottage ‘Mayor of Hogsnorton’ and the neighbours ‘Lord and Lady Marshmallow’ after the characters in his comedy.  The house next door retains the name ‘Marshmallow’.

According to Graham Fothergill, many of the roads and buildings in Knebworth are named after local ‘dignitaries’.  For example, Stonecroft (Edgar Stone was a parish and District Councillor).  there are similar origins for Gibbons Way, Muirhead Way, Kerr Close, Dumelow Court etc, and more recently Robert Ellis House and Wordsworth Court.  the most recent one, Devey Close, is named after an old Knebworth family who were related to the Smiths (of Smiths Radio) and also to the Lowes.

Hornbeam Spring is not too much of a problem; there is a natural pond in a garden of Sayer Way, which backs on to Hornbeam Spring – and of course hornbeams are trees which are indiginous to the area.