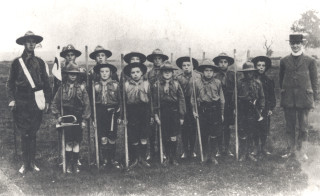 These memories cover the period from the 1920’s to the 1960’s and were recorded from local residents by Ann Judge.

Leisure activities were usually self made, and occurred within the neighbourhood.  For Vic H, when we were smaller, and in the summer, the four of us, Mum would pack up a sandwich lunch or some bottles of pop, and Kitty would be in charge, she was me eldest sister, and we’d take the dog and we’d go across these fields, that are now all built on, up to Rabley Heath and spend a day out there and nobody would worry.  And, Kitty knew where there was a little dell where harebells grew, and she used to pick a bunch of harebells for Mum.  Sometimes she would take us down to Pinkers Wood for bluebells, off Watton Road.  Well, right down the bottom of Watton Road was another jaunt we used to make,  ‘cos there again there was no houses, it was an old farm lane, and there she knew where there was wild primroses and wild violets.  And nobody seemed to worry about us, we’d be out all day, and other times we’d be playing in the meadows here, or up on the recreation ground.  So we were out a lot of the time.

Those fields were our playground

Nen B also describes where she played as a child, yes, we went across to, there were fields, where the British Legion hut is now. Those fields were our playground. And there was a pond, which is no longer there, and we’d catch tadpoles.  It was a very free atmosphere.  This freedom is repeated by Alf W, playing in Old Knebworth I’d got my schoolmates I played with.  And we used to always be playing football.  I mean we had no vandalism them days.  We never locked the doors. My grandfather never locked his back door.  It was always left open.  Oh yes, we used go over, a lot of us, you know, from the village here, we used to spend a lot of our time over at Codicote playing football with them over there. You could go to Welwyn pictures and we used to go on our bikes to Welwyn pictures.  We used to go round the back, throw the bikes up against the wall, go into the pictures and come out, the bikes would still be there.

The brewery at Walkern

As well as playing in the fields, the kids would ride their bikes, or just take walks.  Cynthia H remembers – I had a Grandma and Granddad, they lived in Walkern and, he worked at the Brewery there at Walkern, my Granddad did and I loved to go over and see him, every night I’d go if I could, on my cycle, just from Knebworth to Walkern to see him.  I had a glass of Ginger Beer and that was something.  For Nen Bmy father had a car, which was quite unusual. We used to drive out on a Sunday evening.  That was his outing to a pub somewhere, although we didn’t call it a pub.  And then he used to go and have his drink, and we sat in the car, because the children weren’t allowed in.

The most significant entertainment in the village was the dances.  Maud K remembers her Friday evenings at the Indian Hall at Knebworth House, we danced to records, we used to call it the sixpenny hop.  But we enjoyed ourselves.  But mind you, you had to be home by ten o’clock.  Oh yes.  To prepare for the dances at the Village Hall, Vic H and Alec K both took lessons from a local teacher, Mrs Woodward. As Vic explains – well they used to have dances in the Village Hall, the Elysian Harmonies I think was the band.  And they were quite well run, and people used to dress up and my sisters used to go.  And they got a bit annoyed when Mum encouraged them to take me.  They didn’t think that was good.  But we also had a Mrs Woodward, who lived up Gun Lane, the hill going up to the main road.  And she taught us how to dance.  So we used to go there.

The dances also provided an excellent opportunity to meet the girls and boys and many of the Knebworth residents met their future wives and husbands there.  Kath O explains – well, there was always a live band.  It wasn’t a disco as it is now.  There was always a live band, and my Gran insisted that I always come home in a taxi.  I wasn’t allowed to walk home.  That’s how I met Bob.  He cadged a lift one night.

Soldiers at the dances

And during the war, there were other visitors to the dances, says Olive C –
We used to go up to what we called the village hop every Saturday night, and there were always soldiers there ‘cos of the soldiers billeted at the Golf Club House. So we always had plenty of soldiers to dance with.  And there was the, it was called the Jackson Trio, the Jacksons who lived in Oakfields. And the mother played the piano, one of the brothers played the drums, and I can’t really remember what the other instrument was.  But anyway, whatever it was, he played it, so they were Peter and George Jackson.