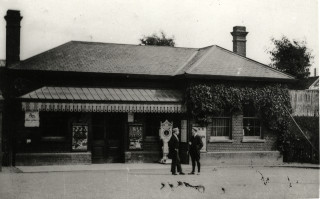 These memories from the period 1920’s to 1960’s, were recorded from local residents by Ann Judge.

The road and railway have always played an important role in the life of Knebworth.  Although the Great North Road passed by Old Knebworth, it was not the road that influenced the rapid development of Knebworth, but the coming of railway in the 1850s, and the opening of the station in 1884.  The station enabled people to travel to work, particularly to London as Vic H explains – Yes, Dad was a silk manufacturer’s agent, and he had an office in the City.  He always used to catch the 5.10 from Kings Cross that used to be due in here at 10 to 6. And we children had to be indoors then.  When Vic started work, he too commuted to London – I think I used to catch the 7.23 or something in the morning, train, and be back half-6ish to 7, at night.  And initially of course we used to work Saturday mornings as well.  When we travelled to London we would know a large number of the people on the platform, and not only know them, but know what their business was and what they were up to.  But now when I go up, I don’t see anybody that I know. Occasionally there’s someone I can stand and chat to but it’s quite different from that point of view.

Mrs H’s husband was also a London commuter – he went up every day. There was a group of them, they used to play whist on the way up.  It was easier, not so crowded I suppose.  And they had their own carriage and had their games of whist.  Well I met a lady about 15 years ago. And she said oh I knew your husband, I used to play cards with him.  And I’d no idea that she’d known him at all.

The train and bus were also convenient for shopping, and getting to school.  Vic H – we went to school on the train, and then we walked from Hitchin Station to the school, which was probably a good part of a mile. And if the train was late, we ran, we didn’t walk. Joy Abbiss also travelled to school – oh, we went by train.  Yes.  As soon as I went to the other school, my main memory is running for the train.  In the morning, and in the evening.

On the bus to Hitchin

Mrs H –  I shopped almost entirely in the village, although I used to go to Hitchin on the bus, now and then, and do some other shopping, yes.  It was a very cheap bus fare.  It was, as far as I can recollect, it was 7d return.  And tuppence into Stevenage which of course was only the OldTown then. And Olive C –  I had a treat, very often on Saturday afternoon, we’d perhaps go on the train to Welwyn GardenCity.  But not really for shopping, for just looking round.  And then coming home, I mean that was a treat in itself.  When the children got a little bit bigger, say perhaps two and four, I would get the pushchair and I would go up to the train, perhaps to Hitchin, and walk from the station at Hitchin into town and look round the market and for a treat, we would go up, I think it was called Knotts Restaurant, it was over the bakers shop near the market square, and have a cup of tea and a cake, and we thought that was absolutely wonderful because in those days, money was very, very tight.