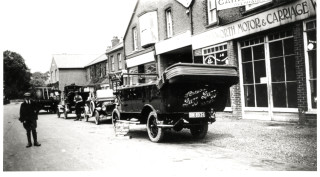 The memories below, covering the period from the 1920’s to 1960’s,  were recorded by Ann Judge from interviews with local people.

Although, by the 1930s, fewer people were working on the farms, it is surprising how many of the villagers still worked locally.  H.G. Creasy, a motor body building business, started in the village in 1911 and Jim N joined as an apprentice, and continued working there throughout the war.  Creasys also provided ‘war work’ for some of the village women. Jim remembers that you served either five or seven years  apprenticeship before you became what they call, qualified or whatever you choose to call it. .  And we used to work from 8 till 6 then.  It was a fifty-hour week. And you had to work Saturday mornings till one o’clock and you never got your money until it was one o’clock.  In the main street, where the window place is, well, that was all Creasy’s that was.  Well it goes right down to the back there.  There used to be the garage on the front, and the paint shop was next to it , and there was a machine shop, woodwork machine shop.  And then there was the blacksmith.  And on the left-hand side, there was another huge body shop, which they used during the war years. Well firstly  there was nobody made paint, in those days, all made up from paste and powder . And my uncle used to do all that job years ago.  And then later on, they used to have like a mill, the paint was made.  We used to grind, make sure there was no bits and pieces in the paint. For war work, oh yes, this large body shop A very large shop, it really was.  It was full of lathes, and there was girls, well girls managed to run these machines. They earned a lot of money these girls.

Shops and services were also an important source of work in the village. Cynthia H worked in the local butchers, Gibsons, following her father who worked at Farrins, another local butcher. Her parents then set up their own shop then when he came and bought the house in Gun Lane, he started up, selling greengrocery.  And he bought a horse and a cart, and he used to go around Knebworth selling all stuff, you know, potatoes, green stuff…

Alec K’s wife Edwina was a hairdresser, she used to go around doing hair, with her trolley, on her bike.  In fact if she hadn’t got her bike, nobody knew her. Other local services provided were cleaning and dressmaking.  Joy Abbis recalls my Aunt, she’d go to people’s houses for the day to do dressmaking, so she was out from the house a lot.

And for Olive C my mother in law always went out to work, she did charring, and she also did the Rector, Denton Sayers and his wife, their washing and other people’s washing that she went to work for.  So, on a Monday morning, she’d get up early, light the copper, there was a brick copper in the corner of the kitchen, light the fire, boil it up, and she used to wash continually all day.  And about 4, if you went there about 4 o’clock she’d just be clearing up, and washing the floor and everything.

No work, no money

Alf W also worked locally –  I left school when I was 14.  And I left, ‘cos in them days no work, no money.  And I left and I got a job under the chauffeur at Park House which was Buchanans, just between Nup End and the Lytton Arms, and I got 5 shillings a week there.  I used to fill the coal buckets then chop the wood, run the errands to the Post Office, wash the car.  They had two cars, and I used to have to help in the garden when I’d got nothing to do in the house.  But then, after two years there, I left and went to Knebworth Estates in the pumping station, up Old Knebworth Lane which is now Hertbeat Radio Station.  There was a well there, and used to operate the pumps there, you couldn’t leave them.  And I used to operate the one down at Watton Road here, which was a borehole. We’d start the pump up, and leave it for the day, and then go back at night and switch off.  Down in Watton Road, you had to put chlorine in the water because it wasn’t as good as the one up Old Knebworth. The one up Old Knebworth was crystal clear and you could go down the well, and you could walk under the road nearly to the village school.