Arbor Day in the Garden City 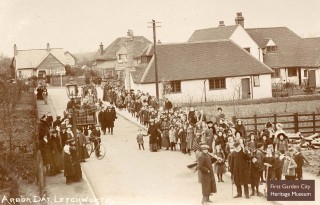 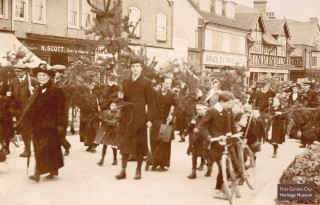 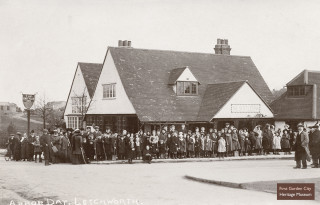 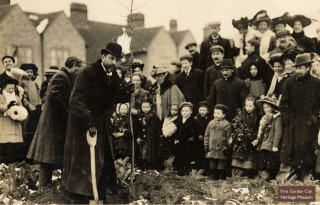 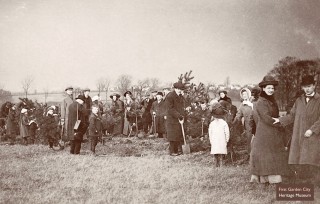 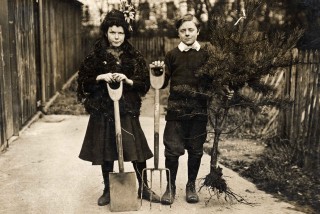 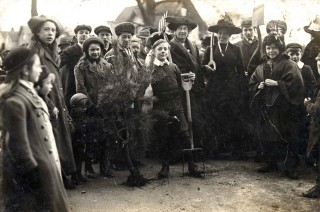 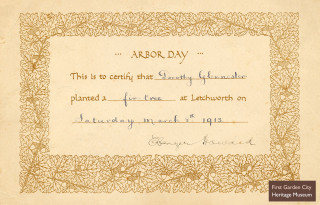 Arbor Day was created by J Sterling Morton in 1872, in Nebraska, USA. The day encourages the planting and care of trees. This fitted very well with the Garden City plan and principles which included tree planting schemes – 100,000 trees were thought to have been planted by 1909, only six years after the start of the Garden City.

The day would begin with a procession led by children, often in costume, who would then each plant a tree. The girl leading the first procession was described as wearing:

‘a wreath of ivy, in which a single white flower has been set, her neck encircled by a chain of acorn cups’.

The children would sing ‘The Planting Song’ by Letchworth resident Harold Hare.

‘Children, come and join our band,

Joy in heart and spade in hand,

Marching through the City.

Trees we plant for shady street,

Trees to cast a fragrance sweet

On the Summer air.

We will plant for days unseen,

For the future City;

Then shall walls of wood and green

On walls of brick take pity;

From the Oak-trees leafy arch

Acorns will be dropping.

Infant trees of Fir and Beech,

In the soil now treading,

Some day up to Heaven shall reach

Then will they, with years and care,

Sheltering people of the air,

Birds and men will bless this day,

And us who now assemble,

When they see the Pine-trees sway

And hear the Poplars tremble.

Joy in heart and spade in hand,

Marching through the City. ‘

Each child would receive a certificate for taking part. The trees were planted at various locations including Common View on the first Arbor Day, and Norton School. Trees such as fir, chestnut, poplar and birch were planted.

The spirit of Arbor Day was revived in 2008, 100 years after the first celebration, when pupils from Lordship Farm and St. Thomas More schools planted trees at Manor Wood and Hillbrow recreation ground.