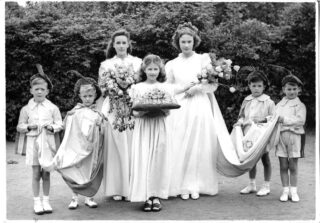 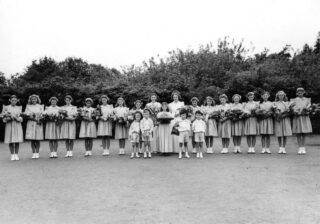 I’ve attached a couple of photographs from the Mayday celebrations at Norton Secondary Modern School in 1947, to add to your collection. I was one of the pages. I didn’t attend the school at the time, having started school only in the previous January, when there was an infants’ school in the Methodist church hall buildings, in the fork between North Avenue and Common View, behind what was then the Co-op and is now the Triangle Stores. The buildings were badly damaged by fire in 1996 and partly rebuilt, so they are not as I remember them. My family lived in Norton Road, and I used to walk down the footpath that links Norton Road with North Avenue and ends almost opposite the church.

Using the May Queen list on the site, I can see that the queen was Valerie Sanders and the queen from the previous year was Margaret Day. I have to rely on my memory for the pages. On the photograph of the central group, the pages, from left to right are Gareth Gunning, unknown, Rodney Bywaters, Kenneth Vines (your correspondent).