The centenary of the 1912 Letchworth air crash 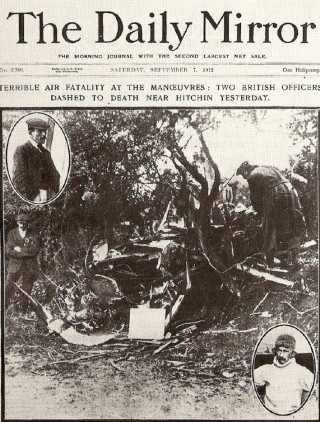 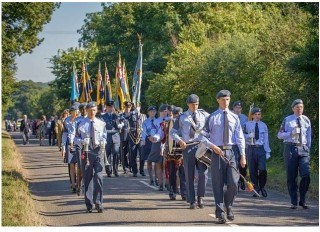 A procession was held to mark the 100th anniversary of a fatal plane crash.
Photo courtesy of Letchworth Garden City Heritage Foundation

Tucked into the hedge by the road out of Willian towards Great Wymondley there is a small military memorial. Like many similar memorials across the country it is decorated with red poppies every year.

But a close inspection reveals that the simple stone cross has nothing to do with the Great War but, in fact, commemorates the death of two brave English airmen two years before in an accident that happened mere months after the formation of the then Royal Flying Corps, when the very idea of using aircraft in war was at best an interesting idea and the action of getting into these flimsy machines was an act of immense bravery.

On 6th Sep 1912 two early “heavier than air machines” took off from Wallingford Berkshire. This operational flight was part of the 75,000-troop manoeuvres taking place in East Anglia at that time. General Haig was leading the “RED Force” invaders with the object of taking London, and “BLUE Force” under General Greigson was defending the Capital. No 3 Squadron of the Royal Flying Corps, formed on 13th May 1912 at Larkhill, was under the command of Capt Brooke Popham, who was flying a biplane (and was accompanied by a Mr de Havilland, who would achieve some fame in the future with his own aircraft company).

The second aircraft, a monoplane built by Depudussin at Bethany near Rheims had previously won second place in the Military Aircraft Trails held the previous month. This 100 hp Gnome-engine aircraft had been modified by inserting an observer wicker seat in front of the Pilot. This was flown by Capt Patrick Hamilton, Lt Atholl Wyness Stuart acting as Observer.

Just after 06:00Hrs on a gusty morning Captain Hamilton took his aeroplane into the air from a field near Wallingford in Berkshire.  Flying conditions were not ideal but they were not the worst Captain Hamilton had encountered – he had already  survived two crashes in his short flying career, including  a narrow escape from death while flying in America, when his aircraft crashed after being sucked into an air pocket.

In fact, the three men were flying at a time when there was still much to be learned about aviation and when many still held doubts about its potential. Since there was as yet no aeronautical language, motoring terms were frequently applied to these new vehicles of the air. The control column was ‘the steering wheel’, the metal engine casing or cowling was ‘the bonnet’ and airfields were known, daintily, as ‘alighting grounds’. Aviators of this time had no standard flying kit beyond an assortment of leather coats and jerkins, breeches and leather caps which had been designed originally for the pioneer motorists and motor-cyclists.

The two aircraft parted company on the borders of Herts/Bucks aiming to meet up later that morning. Their mission was to fly as reconnaissance for the “defenders” in the manoeuvres, thus demonstrating the potential usefulness of this new invention. Capt Popham accelerated away in his faster biplane and waved farewell to his colleagues. It was the last time he was to see them alive.

A few minutes later the Deperdussin was approaching the ‘alighting’ area, which was part of a 100 acre field in Willian (owned by Mr Walter Brett, then landlord of the George and Dragon public house in Graveley) which had been prepared for its arrival. There was some excitement locally – these astonishing machines still created a stir everywhere just by flying over a town or village, and now one was going to actually land here on the edge of the new Garden City. As a result, when Capt Hamilton passed  over Stevenage and and began his descent, hundreds of eyes were upon him. There were many, therefore, who witnessed with horror what happened next.

Nearly all estimated that the aircraft was at about six hundred feet when the trouble began. Some claimed to have seen one of the aviators fall from the aircraft to his death some time before the machine began its final dive. One said it ‘plummeted to earth like a dart’, another that it ‘fluttered to the ground like a bird shot on the wing’. However, most agreed that the  60hp Gnôme rotary engine , capable of producing speeds of 70 knots, was giving the pilot trouble well before the crash dive. It was clear, too, that the port wing folded and collapsed while the pilot, his engine having cut out, was desperately trying to reduce height for an emergency landing.

Instead, his aircraft virtually disintegrated in mid-air and fell into a thick hedge at the bottom of Mr Brett’s meadow. “I saw the aircraft wobbling about,” he was to tell the coroner later. “It dipped and then came a report like a gun: Then the aircraft seemed to collapse altogether. I was too horrified to look any more … I ran down and found the officers lying with the machine on top of them.’ Both had died immediately upon impact.

The official accident report is somewhat more sparing and unemotional in its language. In summary it said that at 0710 hrs as the aircraft passed above Graveley it suffered a fracture of the engine’s valve operating gear. This in turn caused the flailing push rods to dislodge the bonnet, which normally protected the aviators from the generous spray of Castor oil. This in turn severed the monoplane wing bracing wires causing the port wing to fold, and the aircraft to plummet to the ground – instantly killing both aviators.

Brooke Popham was notified of his colleagues fate soon afterwards and hurried to the scene to organise the recovery and have the bodies conveyed to the mortuary attached to St Saviours Church in Hitchin. The memorial service was followed by a full military procession escorting the gun carriages carrying the two coffins to Hitchin Railway Station. Capt Hamilton’s coffin returned to Hythe, Kent and Lt Wyness Stuart’s wife accompanied this coffin to Mells in Somerset. A full Military Burial was carried out at Hythe for Hamilton and for Wyness Stuart in the village of Great Elm near Mells.

The RFC memorial on the Willian to Gt Wymondley road was raised by public subscription and was the first memorial to individual members of the armed services whilst under military orders.

Four days later a Bristol Coanda monoplane, flying as part of the same manoeuvres, crashed at Wolvercote Bridge, Oxford, leading to a ban on the building of further monoplanes in favour of inherent strength of Biplanes. The initial ban remained at least partially effective until the early 30s when the Blenheim, Hurricane and Spitfire came into service

One hundred years later on Sunday 9th September 2012 the RAF Association (Letchworth, Hitchin & District Branch), supported by Letchworth Garden City Heritage Foundation held a centenary commemoration at the Memorial on the Willian Road and the memorial itself was repainted and restored for the event, thanks to grants from the County Council. The guests included The Colour Party of R.A.F. No 3(F) Squadron (the which is what No 3 Squadron of the RFC later became); serving R.A.F. Officers from R.A.F. Coningsby (the home of the squadron) and Henlow; Local Civic dignitaries; the next of Kin of Hamilton and Wyness Stuart; and Members of local veteran Associations with their Standards.

Source: RAFA (Letchworth) press release, and Frank Cooke’s page on the incident (which goes into much more detail).