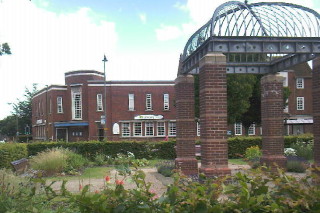 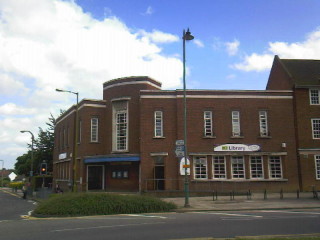 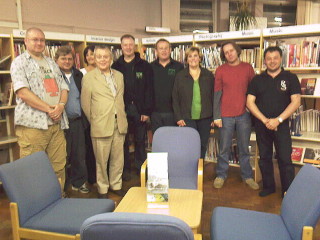 Rumours of a ghostly presence and sightings of a spirit had been reported by staff at the library over the years.  Book have also been known to fly off the shelves.

Letchworth’s library building is 70 years old and was purpose built; with open fields on the site beforehand, so it is not somewhere you might expect to harbour a ghost.   Some staff felt that the spirit was that of a past library caretaker and noted that things happened when they were dilatory in locking up.

Sightings of a spirit

One very interesting ghost sighting was made by two staff in the 1970s, when the building was closed for the floor to be re-varnished.   The staff were sitting on the stairs looking in on the freshly varnished library when they saw a young fair haired man walking across the library.  Thinking that he would ruin the new floor they called out to him and one ran around to the side door to stop him.  There was no one there and no prints in the sticky varnish.

In the autumn of 2008 I had the opportunity to ask members of the Anglia Paranormal Investigation Society (APIS) to investigate Letchworth Library, to see whether they could detect any paranormal activity.

Things that go bump in the night

A copy of their report can be seen on their website www.apisteamspirit.co.uk/ , and also in Damien O’Dell’s book, “Paranormal Hertfordshire” .   What follows is an account of the things that I saw and heard during their two night-time investigations at the library.

Turn out the light

Before the watches began, one of the ghost hunters asked the spirit to turn off the light on his EMF meter (the light indicated that there might be a spirit about).  The light went out and at the same time the electric doors opened and closed themselves.  Later, in the Lecture Theatre, I was watching as one of a pair of divining rods started rotating, like the hand of a clock!

Footsteps in the dark

The most convincing thing for me was (together with another member of library staff) hearing footsteps coming towards the office where I was working, when I knew that there was no-one there.   This happened on a number of occasions during the ghost hunters’ watches.  Opening the office door revealed an empty corridor.  The footsteps sounded like a member of staff about their duties. On one occasion hearing this I went again to the door to open it, but my nerve failed me as the steps sounded so loud and clear, just outside the door!  We heard the steps go past the office door and a clonking sound as if books were being put on a shelf.

The ghost hunters staked out various sites around the building and stayed in position for 45 minute watches during which all was quiet and dark.   Very interesting phenomena were recorded; a book jumping off a shelf, some loud thumps and a pot of pencils being thrown across the lecture hall.  Interestingly, at the public talk that followed the investigations, a pot of pens shot off the window sill in the lecture hall.  I thought at the time that a gust of wind had blown it, as the window was open. Later I realised that a stack of paper next to it on the sill had not moved at all.  Perhaps the library ghost was listening in?

Time to lock up

When the investigators’ night watches finished it was time to lock up the building, which I was glad not to do alone!  APIS did not seem to find anything unpleasant and as far as I can tell, the library has a good atmosphere, but perhaps you should visit and see?