In Letchworth, the Butchers' shops of the early 1900s were much the same as Victorian Butchers' markets. 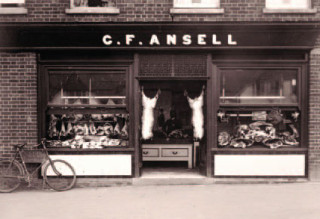 Outside of Ansell Butcher's shop, c. 1907. Blinds and canopies offered protection from rain and sunlight. Some Butchers opted to locate their shop on the shadier side of the street. 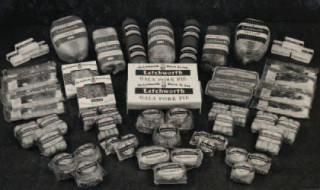 A selection of meat products sold by The Letchworth Bacon Company, c. 1960s. During the Second World War, the company received supplies of livestock from the government. After the rationing period, the company formed Letchworth Livestock Limited, which allowed them to buy direct from local farms.

Sash-windows at the front of the shop allowed the Butcher to openly display and remove his meat. These windows also meant customers on the pavement could be served, whilst also ventilating the shop itself.

Ansell Butchers was one of the first shops to open on Station Road, around 1906. Ansell was typical of Edwardian Butchers, where open window displays of hanging carcasses were used to attract customers. Butchers such as Ansell would probably have had sawdust on the shop floor to absorb the blood from the meat.

By the 1920s the use of granite and glazed tiles allowed Butchers’ shops to be cleaned more easily. By this time there were around seven Butchers’ shops in Letchworth, including: E.W Crump, Deans Brothers and F.B. Longley.

Self-selection was introduced in the 1960s and the number of Butchers shops increased to around sixteen. This also included the Letchworth Bacon Company, opened in 1935, who ran an abattoir and an ice-cream factory