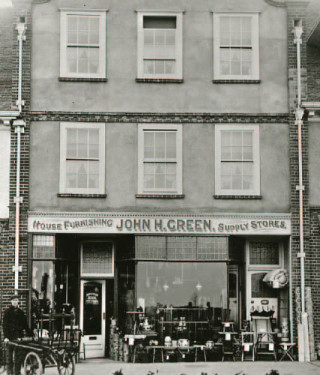 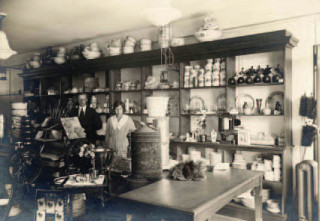 The Hardware Department of the Co-operative Store. c 1920 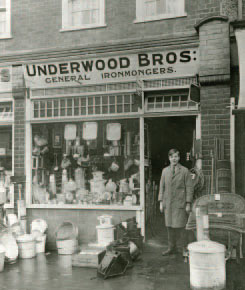 The Co-operative Store on Leys Avenue had a separate department for hardware and home furnishings. J.H. Green sold home furnishings but also offered a variety of blinds, cabinets and upholstery. Both stores opened in 1907.

By the 1920s and 1930s technology was changing, together with the choice in furnishing products. Stores such asT. Brooker & Sons Ltd. offered “tools for all trades” with choices in trunks, bags and suitcases. Underwoods of Leys Avenue also offered new luxuries in metal bathroom cabinets, hot water bottles and the “pyramid toaster.”

Televisions were not very common until long after the Second World War. Events such as the Queen’s Coronation in 1953, encouraged people to buy television sets, which at the time cost around 80 guineas.

County Cycles, who sold televisions as well as bicycles, eventually changed their name and trade to suit the rising popularity of televisions.

Other shops such as Norton Radio, R.M. Berret and E.R. Stevens also sold televisions or electrical goods.These shops even offered a service to charge up customer’s radio batteries, which would have been done once or twice a week.