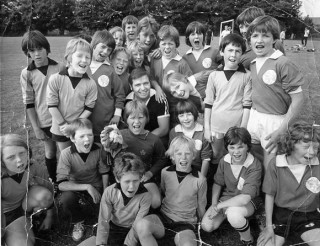 David Gurd with the Eagles team in their first season, 1979-80

Were you in this team or recognise anyone? Add your memories in the comments section below.

In 1973, I was approached by a few of the boys at Briar Patch who asked if they could start a football team. I agreed that it was a good idea and advised them that rather than become a team of “under-privileged children “it would be better to invite some of their friends from school to become part of the team. We continued by arranging games with local teams and also did some tours to Brighton and Huddersfield where we played games against local teams in those areas.

In 1979 we entered the League having got together with some of the Dads and Mums in the Westbury estate area and we then entered the League, the Royston Crow League in 1979, with two teams, under twelve and under fourteen. So at that point we had 30 boys. As time progressed we were then called Westbury Eagles and as time progressed we brought in more and more players from the whole of Letchworth and became known as Letchworth Garden City Eagles.

We have progressed on from there to becoming the largest youth football club in Hertfordshire – North Hertfordshire – and the surrounding areas with a total number of players of just under 500. Included in that now is the girls’ teams that we have introduced to the Eagles and that is an area that we are working on now with some degree of effort and support from local parents.