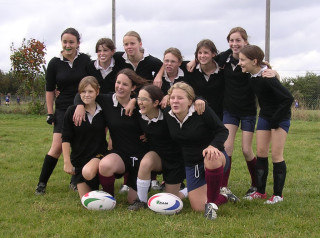 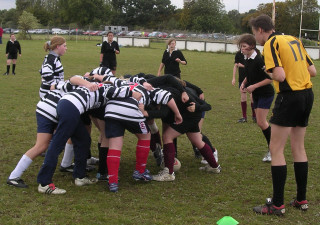 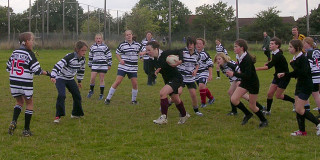 Hayley makes a break - this was to become a familiar sight on rugby grounds all over England over the next 5 years! Letchworth girls v. Milton Keynes, 10th October 2004
Mike Alcock 2004

Following England’s success in the 2003 Rugby World Cup, there was a surge of interest in rugby union and not just from the boys …

John Birch found himself being asked by a local teenage girl, “Where can I play rugby?” and duly set off to find a local club she could join. When he found no club in the area played girls rugby, rather than explaining that to the girl as most of us would have done, John asked how many other girls wanted to play? The answer was that around a dozen were interested in trying the sport so John set about organising a team himself.

By March 2004, John tested the water with some tag rugby sessions leading up to forming a team to compete in the Herts Youth Games and the number of players kept increasing … but they were not completely happy. They had seen the World Cup and wanted to play that game not the sanitised tag rugby offered to them so far and, once again, John raised the bar and set up a girls section at the local club – Letchworth Garden City RFC on Baldock Road for the 2004/5 season. And so it was, that on October 10th 2004, Letchworth girls turned out for their first game of ‘proper’ rugby against Milton Keynes.