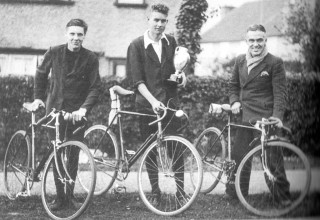 Everybody had bicycles – well, 99% per cent had bicycles and at half past twelve the hooters used to go and everybody came out and they were four abreast going one way and four abreast going the other so Works Road was eight abreast in bikes. Hell for leather, but you had to be ultra careful. Don’t forget there was still a lot of horse-drawn traffic on the road and it wasn’t always very pleasant, it was a bit smelly. And if it was wet roads, you got sprayed with horse manure if you weren’t careful. Old Charley Ball still had a lot of horse-drawn carts on the road. Doesn’t seem feasible to us nowadays does it? But the roses were good. When the coal merchant or the milk people came along or Redrup and Starking’s bread, who had a great big horse in their cart, Mum would say, ‘Quick get the bucket, nip out there’s a ha’penny for you.’Bucket of manure. Lovely roses.

extract from “Letchworth Recollections” – memories of Letchworth 1903 to 1939