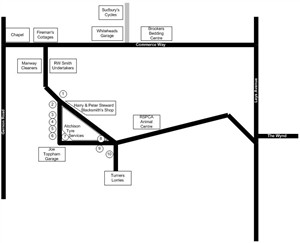 In Letchworth, Commerce Lane no longer exists, but it used to run from Commerce Avenue to Leys Avenue, coming out next to the current fish and chip shop, opposite the entrance to The Wynd.

As you came down Gernon Road, turning into Commerce Avenue, there was a small chapel on the corner, and a row of fireman’s cottages.  On the left you would see the busy frontage of Whiteheads Garage, the home of Whiteheads Taxis, next to the alley which lead back to Eastcheap and Sudbury’s Cycles. Beyond the lane was the BBC (Brookers Bedding Centre).  Turning right into Commerce Lane (I’m not sure when this was turned into a one-way street, but this was a wise step as it was extremely narrow) on the left you’d see R.W. Smith undertakers, where Ted Crouch (who later had his own undertaking business in Baldock) made coffins, on the opposite side was Manway Dry Cleaners.

There was then a narrow corner, and on the left if you were lucky, you’d bump into Eric White and his lovely green Bristol car (but I’m afraid I don’t know what he did there), opposite on the right was Harry Metcalf and his gents hairdressing business.  At this point, Commerce Lane splits into two around the Aitchison Tyre Services building, on the main road to the left is the blacksmiths shop of Harry and Peter Steward where I remember there was always a welcome to a young boy who wanted to see horseshoes being made and fitted at the hot forge fire.

The right hand part of Commerce lane was a series of garage units, with a couple of large ‘units’ above.  First was Edwin Taylor’s two units, one a garage for his mobile butcher/grocer van, and one which was a storage unit containing a very large walk-in fridge for the meat.  His mobile butchery/grocery business mainly served the North Herts villages, Bygrave, Ashwell, Sandon, Stotfold, Odsey, Wedon Way, Radwell, Newnham and naturally Letchworth.

Several small businesses moved in and out of the lane, including Mr. Kift’s cars and a drag-racing car outfit, but some long-standing residents were Peter G. Lawrence and his company PGL Holidays (now very famous for adventure holidays in the Wye Valley), and above was were Harry Doherty and Bill Hendersby’s cabinet making skills were practised.  F.J. “Joe” Topham who would arrive at his garage in his lovely red and black old Morris, or on his tiny Corgi motorcycle had the large corner unit opposite a communal incinerator.  There was Aitchison’s Tyre Services where you could have your battery recharged rather than simply replaced, and a gas lamp that I remember being lit manually close to the entrance.

Around the corner was Jack Cooper’s potato crisp factory and the tiny road to Turner’s lorry depot (what a place to drive large lorries!!!)

On the final leg of the Lane on the left, was the RSPCA Animal Centre, and as we turn into Leys avenue, on the right, outside what is now the fish and chip shop was one of Letchworth’s working horse troughs (the other was opposite what is now a public convenience next to the paddling pool.

This page was originally added to ‘Herts Memories’ during 2009