Manufacturers of municipal vehicles in Letchworth for almost 70 years. 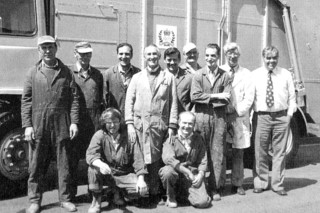 In Shelvokes heyday, we had Number One factory, which was the main works in Icknield Way.  Number Two factory was Blackhorse Road; Number Three factory was down by the Letchworth Power Station, next to that.   Number Four factory was a service factory at the old Hands Trailer factory.   Number Four factory was the Service Department.  We had an engineering works at St Neots.  We had two at St Neots.  We had depots making parts for us in Birmingham, Manchester, Birtley in CountyDurham and Merthyr in Wales. They were all doing fabrication work and making parts up which were being collated into the Letchworth building to increase production.

I think as far as I can remember, if you included all those factories and all those depots in their heyday, there would have been about 1500 people, and when we finished I think there was about 20 of us. I know in our heyday we were somewhere between a thousand and 15 hundred people in the Shelvokes group all round, including Letchworth and surrounding areas and all round the country and we were building anything up to somewhere around 70 vehicles per month and these were all finished, delivered vehicles.