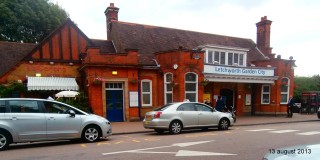 I would like to say that I rote a special letter to the people who now live in the home where Gordon lived when he was a boy during the war.I do hope I get a letter back with news of any infomation.

and cart to the left side where now stands a new home and from round the back opposite the gate a few more looks like a mini estate.

He was made to go to school every day which he was not fond of much due to a lad picking on him and one day Gordon went to the train station got him self on a train and went home to Bexhill on Sea,

And this was a long jurney for a boy back then of just 13yrs old.