Acclaimed pioneers of both Garden City architecture and town planning. 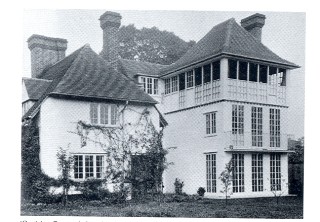 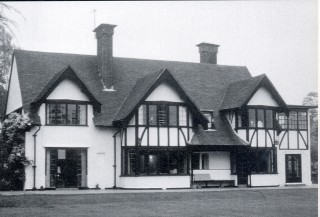 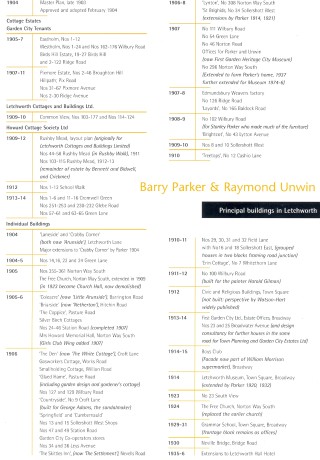 Parker designed middle-class houses as well as sketching idealised working class houses for Unwin. By 1901, the pair employed three people, who all opened offices in Letchworth, they also published a book called “The Art of Building a Home”.

Parker and Unwin lodged on the Baldock Road after buying the Letchworth estate, where they sketched layouts. In winter 1903, they entered a competition for the Letchworth plan, which was provissionally approved of February 1904 and they were retained by First Garden City as consultants. After doing some work for Joesph Rowntree, they moved their office to Baldock in 1904 and then to Letchworth in 1907. Unwin moved into (Laneside) one of a pair semi-detached houses in 1904 and Parker moved into the other (Crabby Corner) after his marriage to Mabel Burton in 1906.

Unwin became involved in the Hampstead Garden Suburb, whilst Parker focused on Letchworth as well as gaining work for houses elsewhere including; “Whirriestone”, Rochdale and “The Clock House”, Cowfold. In 1914, Unwin became Chief Town Planning Inspector at Local Government, whilst Parker worked abroad in Oporto (1915) and Brazil (1917-9). Unwim supervised the Ministry of Munitions housing programme, including Gretna, Scotland. Unwin successfully advocated state endorsement of Garden City designs subsidised under the 1919 Housing Act and was appointed Chief Housing Architect and then Chief Technical Officer for Building and Town Planning at the Ministry of Health. After retiring in 1928, he became Chief Technical Adviser to the Greater London Regional Plan Committee. Unwin was RIBA President in 1931-3, in the 1930s, he was visiting Professor of Planning at Colombia University, New York. He died in 1940 at his daughter’s summer house in Lyme, Connecticut.

Parker designed council estates and was then appointed to plan Wythenshawe, Manchester, where his innovative Master Plan was put into practise, he was President of the Town Planning Institute in 1929-30 and retired in 1942, he died in 1947.

Unwin was Knighted in 1932 and recieved the Royal Gold Medal in Architecture in 1937. Parker was awarded the Howard Medal in 1941.

Sir Christopher Wren’s 1666 plan for the re-building of London was transposed as the framework for the Master Plan, it was internationally influential and set the design for Unwin and Parker and their contemporaries.

Unwin set a maximum of 12 houses per acre and used the gables of “Parlour” houses to design picturesque streets, this style was used in Wilbury Road, Birds Hill and Ridge Road but after criticism of excessive cost, Unwin decided to be more economical with the Pixmore Estate. Due to alterations and parking difficulties the innovacy of the original design has been forgotten. The Silver Birch three bedroomed cottages only cost £120 at the time.

In 1904, semi-detached houses were built in Letchworth Lane; “Laneside” and “Crabby Corner”, (now “Arunside”) were enlarged cottages. Parker moved in Crabby Corner and with a growing family built on it with a three-storey tower that incorporated a sleeping porch, drawing room and playroom. Parker and Unwin also built a house for Ebenezer Howard.

The Middle-class houses that were built had a spatial complexity in the entrance halls, corner bays and inglehooks emphasised by the pyramid shaped roofs. The Coppice and Glaed Hame, both larger houses in Pasture Road had triple-gabled garden fronts that were near symmetrical. The interiors were open-plan with inter-connecting entrance hall, living hall and dining room, this was radical for the time. They also had a £250 gardener’s cottage and summer house.