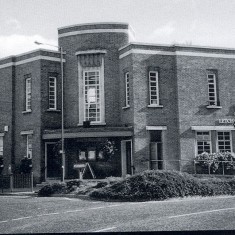 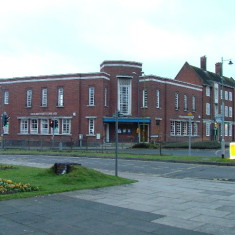 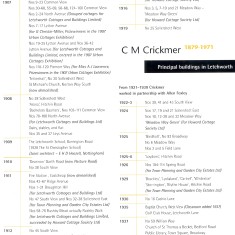 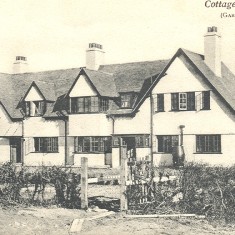 Crickmer as an architect is most commonly known for his work in Letchworth area and is regarded as the most important Letchworth architect outside of Parker and Unwin.

The most distinctive design of Crickmer’s early career was his ‘Crossways’ Hitchin Road in 1906 which is still regarded as one of his best houses and is synonymous for its ‘M’ gable infilled with studwork.

During the 1930s Crickmer updated his designs in line with the growing influence of modernism in architecture which culminated in the Letchworth Library in 1937 which with its irregular site and formal Georgian character posed an aesthetic challenge. In the end the corner entrance was emphasised by a canopy and a setback tall window, with a curved parapet rising above the roofline. The ground-floor windows on the wings of the library were treated as a continuous band and gave the library a horizontal emphasis.

Crickmer’s earliest houses No’s 121-127 Green Lane were shown in the 1905 Cheap Cottage Competition and applauded for their neat, reticent designs.

Unlike many of his contemporaries Crickmer did not retire after the Second World War and by contrast he appeared to work with a new vigour. He was over 80 when the extensions to the Letchworth Library and Museum were completed.

When Crickmer approached his ‘nineties’ he accepted a small commision for alterations and new entrance gates for ‘Crossways’ Hitchin Road, one of his first Garden City houses built in 1906.