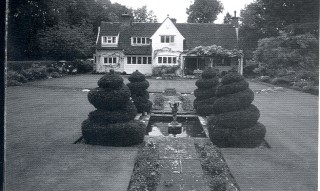 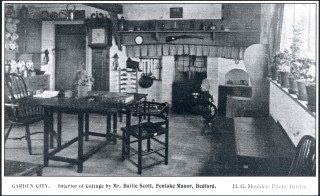 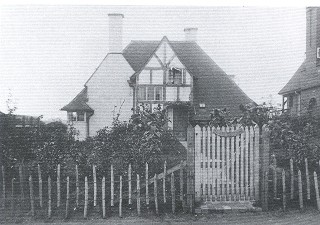 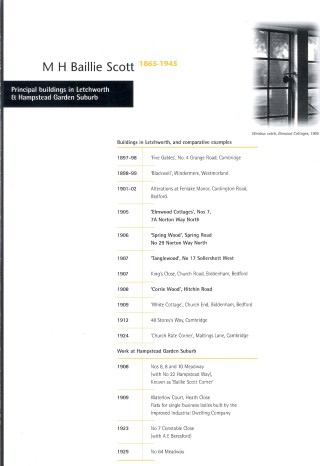 Before coming to Letchworth in 1905 M H Baillie Scott was already a famous and internationally acclaimed architect after his design of the Grand-Ducal Apartments.

All Scott’s work show his unique use of simple decorations but good quality materials to relate to constructional elements such as staircases which often resulted in bold internal planning with rooms opening out into each other. Scott also paid meticulous attention to small details such as door and hinges. This individual style was based on revival of late mediavel hall houses.

Scott was a large critic of the constraining effects of the byelaws in the Garden City on design and the principal of the Garden city itself but when it came to building his first dwellings in Letchworth in 1905- the Elmwood Cottages- the process of obtaining landlord consent from the First Garden City Ltd and byelaw approval from the Hitchin Rural District Council were unproblematic.

‘The cottage should be the home come true’

Elmwood Cottages No’s 7 and 7A Norton Way North were entry No 65 in Class 4 of the 1905 Cheap Cottage Exhibition. The Catalogue does not refer to a developer or contractor and it is possible that using his own money paid for the cottages himself allowing him to ignore the cost limit of £150 on houses for each dwelling and spend £420.

Ineligible for the cheap cottage competition the ‘Elmwood Cottages’ became one of the most popular exhibits. Many elements of the Elmwood Cottages were used in ‘Tanglewood’ No 17 Sollershott West, a later creation of Scott’s in 1907, such as the front elevation with its front gables. As was Scott’s style for meticulous attention in relation to small details tue window shutters were pierced with a heart motif.

In 1906 Scott returned to the Garden City and built two more houses No 29 Norton Way North and ‘Spring Wood’ Spring Road. No 29 Norton Way North is a contrast of scales with the right side of the house having a tiled roof which sweeps down within a yard above ground level and to the left is a tall brick chimney towering above a tiny corner bay window emphasised with its white wash which is retained today.

‘Spring Wood’ was originally designed and built for an artist by the name of Edward Docker meaning that the house was dominated by a two storey studio.

‘Corrie Wood’ Hitchin Road was the last of Scott’s houses in Letchworth built in 1908 which is dominated externally by the hipped roof which sweeps down on the north front to a mere two feet above ground level whilst the main living rooms were ranged across the south front.