Founder of the Garden Cities 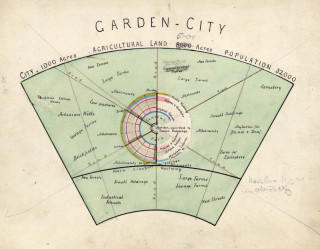 Howard's plan for the Garden City and the Rural Belt.
Hertfordshire Archives and Local Studies 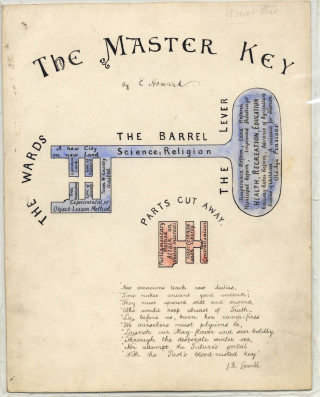 Ebenezer Howard was born in London, in 1850 and educated at various places, including for a short time in Cheshunt in Hertfordshire. He spent most of his working life as a shorthand writer, (some of it in America,) having taught himself the subject in his spare time. Through his work for the Royal Commission on Labour in the 1800s, he became acquainted with many leading figures of the day and found widespread concern at the conditions in which many people lived and worked. This awakened his interest in creating a better environment for the working man and his family. In 1899 he formed the Garden City Association, and societies for encouraging the formation of garden cities were established in many countries in Europe and in the USA.

Howard’s pioneering book Tomorrow: A Peacful Path to Real Reform was published in 1898. In it he set out his ideas for the planned development of garden cities, each with a maximum population of 32,000 and surrounded by an agricultral belt. Each garden city should be self-contained for employment and social facilities, and six cities would form a cluster round a “Central City” with a population of 58,000. All the cities would be linked to each other by a radial railway network.

A rural site of 3,818 acres was purchased by the Pioneer Company in north Hertfordshire and the first garden city was created in Letchworth in 1903. Raymond Unwin and Barry Parker were the architects of the Letchworth plan and designed many of its buildings.

Its principles have been widely copied all over the world and interest in the garden city movement is as strong as ever.