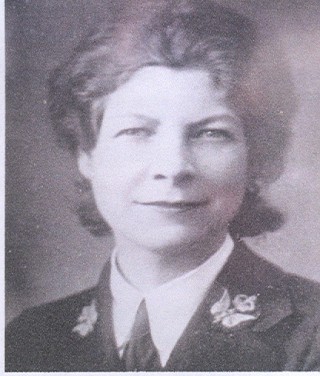 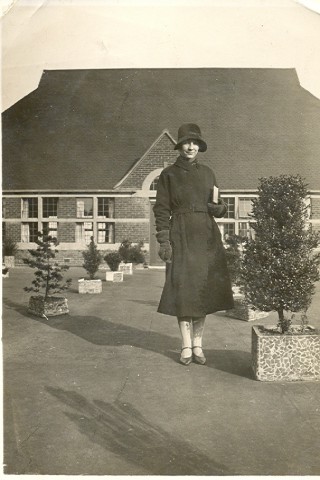 Rosalie in the roof gardens of the Spirella building 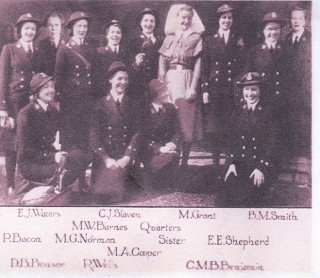 Chief Wrens on the steps of the Cecil Hotel, Scarborough 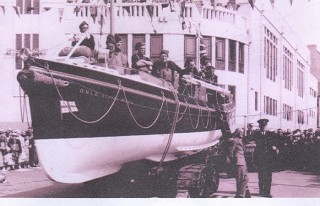 In August 1941 twenty two hand picked Wrens all volunteers were eagerly waiting in Scarborough to join a convoy (OG71) to Gibraltar-the first ever draft to be sent there-where their skills were urgently needed. They included nine cypher officers, twelve Chief Wrens and a Naval Nursing Sister. Amongst the group of Chief Wrens was Rosallie Wells from Letchworth who, when the war came, after working ten years as librarian and assistant nurse at Spirella, gave up her job to enlist in the Wrens and train as a Wireless Telegraphist.

Rosalie was born in Tring in 1907 and came to Letchworth with her widowed mother, sisters, Louisa, Mabel and Florence and brother John, to live at 92 Rushby Mead. Another sister Kate had already moved to the town with her husband Edwin Underwood, who with his brother Bert established a plumbing and ironmongery business in Leys Avenue. In Letchworth Rosalie continued her education at Pixmore School and on leaving followed sisters Louisa and Florence into the nursing profession.

She was described as a popular Spirella employee of a happy and eager disposition, and a well known figure on the Spirella sportsground. She won may trophies and prizes in golf and swimming. She was also a fine dancer and a talented dressmaker.

On the morning of the 13th the Wrens were taken to “Derby House” the WRNS Headquarters in Liverpool and given a lecture by a signal officer on their work abroad. Later they were taken to the ss Aguila, (Eagle) a vessel formerly used for taking passengers on holiday trips to Lisbon and the Canaries. Rosalie found the ship “very nice, beautifully comfortable” and stated,”We are first class passengers and eat well and have the same privileges as the officers.. I think we shall have a good time, everyone seems disposed to be friendly.”

Aguila,was the Commodore ship of the convoy- an armed merchant vessel in which a senior naval officer assumed overall control of the merchantmen liaising with the senior commander of the naval escorts – and thus a prime target for an enemy attack.OG71 headed north-west round the northern most tip of Ireland. Occasionally friendly bombers were seen patrolling the skies, but on 17th August a message was received that long range enemy aircraft were operating in the vicinity and an attack may be expected. On the 18th August a signal from the Admiralty warned that ” More than one U–boat may be shadowing the convoy.” That night the high spirited Wrens dressed up in their Gibraltar whites entertained the company by singing ” The World is waiting for the Sunrise.”

On news of an attack on the rear of the convoy Captain Frith of Aguila ordered all life jackets to be worn and all Wrens to stay together in the library near to the boatdeck, but after an hour with no further alarms he told the passengers they could go to their cabins and lie down but not to undress.Ciscar was attacked and sunk by torpedoes from U-201 whose Kapitanleutnant Adalbert Schnee then turned his attention to the Commodore ship Aguila.

Dame Vera Laughton Mathews Director of W.R.N.S. wrote later to Rosalie’s sister “Two torpedoes hit the ship at 3.0 a.m on the same side as the W.R.N.S cabins. It is therefore certain that all the party were killed instantaneously and had no interval of suffering.” The total loss of life was 145 dead with 16 survivors.

Subsequent to this terrible tragedy parents and friends of the lost Wrens formed the “Aguila Wren” Memorial Fund to provide a Lifeboat which was named and launched at Aberystwyth on 28th June 1952.

Some of the memorial money was also given to pay for a Sick Bay on a new naval escort sloop called HMS Wren and a plaque in remembrance of the 22 Wrens was placed therein.

In Scarborough in July 1972 a seat was also erected on the Lighthouse Pier with the inscription, ” In memory of the twelve Scarborough based WRNS who were lost at sea when the the ss Aguila was torpedoed en route to Gibraltar on 19th August 1941.” The girls are also entered in the Book of Remembrance in the official church of the WRNS, St Mary-le-Strand,London.

Rosalie is of course commemorated on the Letchworth Cenotaph and by a vase donated to the Free Church by Nurse Webb with whom she worked in her Spirella years and where they both worshipped. For a time, Pixmore School which Rosalie attended named one of their Houses ” Wells” House in her honour.

Paul Lund and Harry Ludlam have written a book called Nightmare Convoy: The Story of the Lost Wrens.