A German Spy in London Colney

A short-lived episode in WW2 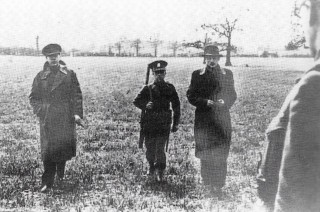 On 13th May 1941, during the early hours, a ‘visitor’ arrived by parachute in the person of Karel (Karl) Richter, who was a German spy. He landed in a field not far from Salisbury Hall.

After lying low for a time he then started walking towards London Colney, when he was approached by a lorry driver seeking directions. Richter, being a large, well-built man, well dressed and carrying a suitcase, and speaking with a strong foreign accent, aroused the lorry driver’s suspicions, so that when he came across a policeman he reported his fears.

Richter was quickly apprehended and was later taken to a Camp 020  (Latchmore House) situated at Ham Common near Richmond on Thames where he was interrogated by Mi5. His ‘cover’, under the name of Fred Snyder was quickly broken and it was established that his mission was to check, for the Abwehr, on a Wulf Schmidt who had previously been ‘turned’ by MI5 into a double agent. This, effectively, decided Richter’s fate as there would have been too great a risk in attempting to ‘turn’ him also.

After a trial at the Old Bailey, Richter was found guilty, on 24th October 1941, and sentenced to death. His appointment with Albert Pierrpoint, the executioner, took place at Wandsworth Prison on 10th December 1941. Pierrpoint later in his autobiography, recounted how Richter, a large and powerful man , fought the warders when they came for him in his condemned cell. Then, in the execution shed, he fought again, managing to snap the straps restraining his wrists. It then required four warders to assist in his final moments when, as a last action, he jumped to avoid the ‘drop’ when the lever was activated, to no avail.