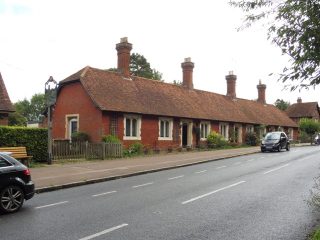 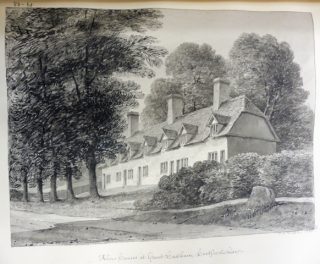 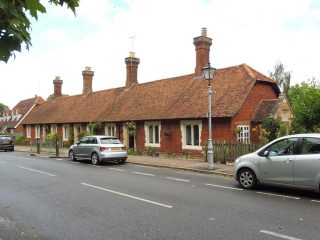 Much Hadham almshouse from south. The rebuilding stone is on the end porch. Aug 2020
Colin Wilson 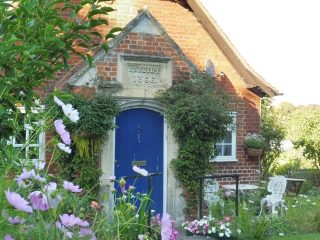 Much Hadham almshouse. The rebuilding datestone on the southern porch. Aug 2016
Colin Wilson 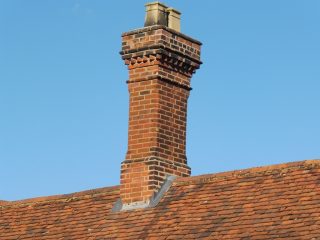 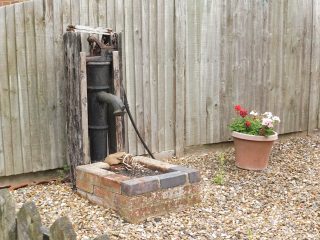 The water pump at the north end of Much Hadham almshouse. Aug 2020
Colin Wilson

The Much Hadham almshouses date back to before 1689. Clutterbuck reports that a Mr Piggott devised that the almshouse residents should receive a loaf of bread on the last Sunday of each month, leaving an endowment of land for his grandson to carry this out. That was in 1689, hence the almshouses existed before that date. Who founded them or when has not been ascertained.

They provided housing for up to eight residents.  There does not seem to be much information about the residential requirements. Cussans states that the residents were eight poor widows, but the 1866 newspaper article mentions aged labourers. It may be that the beneficiaries were changed at the time of rebuilding. The Charity Commission details state they are for poor persons in the parish of Much Hadham.

Similarly there is little information about who managed them, or where any funds came from. A collection was needed for the rebuilding in 1866. The linked charities include clauses that they were for almshouse maintenance, but the inauguration dates of are not included in the Charity Commission data. The relevant charities are Elizabeth Parnell, Honor Parnell, Hugh Parnell, Hales and Some Eleemosynary, Thomas Mott and William Piggott.

Buckler produced a drawing of the almshouses in about 1835. However, they were rebuilt in 1866, as recorded on the datestone. While empty, awaiting reconstruction, they were vandalised according to contemporary newspapers. Work had not started even after 6 weeks.

The rector got the rebuilding collection off to a good start by donating two thirds of the funds needed. The new building looked rather different from the old. It was much lower than the earlier building, losing dormer windows suggesting the previous building had two storeys.

An interesting, maybe unique, aspect of the rebuilding is that one dwelling was allocated as a hospital, available to the villagers as well as the almspeople. It had beds (note the plural) and a nurse, and was basically for accidents. In 1868 Samuel Wright was found in some water, and taken to the almshouse hospital before being transferred to the Union. There are a few almshouses which show evidence of provision for water. At the northern end there was still a water pump in 2020. A look round the back (from a footpath) showed that additions have been made since the rebuilding. There was no attempt to keep the style of the rest of the building. The walls were rendered and painted.

J A Vyse included some notes about these almshouses as they were rebuilt in Victorian times. He notes that the seven dwellings had been reduced to 6. Kitchen extensions had been added to the rear. There was also evidence of improvement work  in 1984.

The Rector and the Churchwardens administered the almshouses and Piggott’s Charity. The chief business at a Parish Council meeting in 1901 was to transfer the administration to the Parish Council. Diverting a footpath in 1904 allowed some more land to be used for the almshouses. The change is shown by comparing the 1898 and 1923 OS maps, but they don’t show how much extra land was thus available.

There are but few other references in the newspapers. In 1909 Mrs. North Hickley kindly invited the almshouse and other aged people to a tea, followed by some entertainment. Martha Bradford died after a long illness in 1913, aged 77. This is consistent with the ages at which almshouse residents often died elsewhere.

Neither Chauncy (1st edition 1700, 2nd edition 1826) nor Victoria County History refer to these almshouses. Maybe this is because they tend to mention almshouses founded by specific persons, not parishes. Clutterbuck’s reference is only passing as he was talking about Piggott’s benefaction.

The building was grade II listed by Historic England in 1985, with a listing reference of 1213560.  The Almshouse Charity is now a linked charity of the Parochial Charities, registered with the Charity Commission ref 212066.

The History & Antiquities of the County of Hertford by Robert Clutterbuck
Printed by and for John Bowyer Nichols, 25 Parliament Street, London 1827
Grangerised copy p407

Buckler’s drawing HALS ref DE/Bg/2/53.
DZ/119/10/414A is the same included in the grangerised version of Clutterbuck

William Piggott’s will dated 1693 held at Essex record office, but text not visible via website. He died at Much Hadham but that does not prove this is the correct will. See UK, Extracted Probate Records, 1269-1975 – Ancestry.co.uk.

Newspapers. These can be accessed on the British Newspaper archive website

Hertfordshire Express and General Advertiser Saturday 27 October 1866 page 3. Almshouses empty and vandalised but not yet rebuilt.