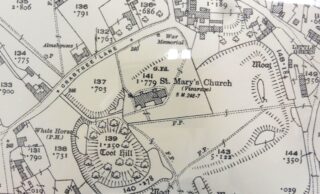 OS 25" map VI.12 1924, showing the almshouses to the north west of the church
Courtesy of Hertfordshire Archives & Local Studies

Palacia Fenn Pollard died in 1913 aged 84, leaving an estate of nearly £14,300. The 1881 census records her as a farmer’s wife, while the 1911 census says she was born in Finchley, North London and was a widow aged 82 who lived at High Down. Victoria County History, pub 1912, reports that High Down (the local manor house dating back to about 1599) was owned by Mr. F. A. Delmé Radcliffe, and occupied by Mrs. Pollard. The 1913 references on the Find a Grave website and a kneeler in the church would thus refer to her.

Mother and daughter sharing the same unusual name did cause some confusion, especially as they died within a couple of years of each other. Her daughter married Rev H W Russell. Her gravestone indicates she lived in Kent, at least for a while. She died at High Down in 1911 aged 52. There is a memorial plate on the lectern step in St Mary’s church. The Civil Register Death Index records her as Palacia Russell.

Two almshouses were erected opposite the church in 1914, in memory of the mother it seems. They are still in operation over a century later. However in all that time they scarcely appear in the usual historical records, while the nearby Hammond / Handscome almshouses are mentioned.

The Pollard Cottages are registered with the Charity Commission, ref 211545. They are described as almshouses for poor persons of good character, preference being given to those who are resident in or near the parish of Pirton at the time of appointment. The governing documents are a conveyance and trust deed dated 09 February 1932 and a scheme of the 30 August 1967.

A couple of views linked with the almshouses are on the Pirton history website. One refers to Clara Harris nee Carter (1879) & her daughter Grace outside Pollard Cottage circa 1920s. The other shows Grace Ellen Harris sitting outside the cottage where Elizabeth Carter and her husband Samuel Webb, lived. This is dated about 1923.