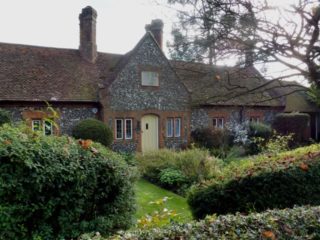 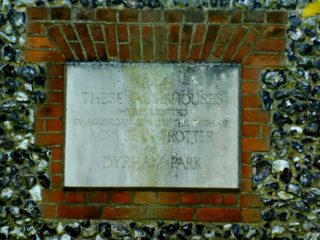 The dedication stone on the front gable. 2016
Colin Wilson 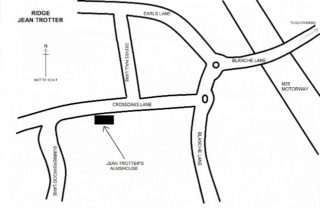 Sketch map showing the location of the almshouses

Gilbert Scott later designed or restored about 850 buildings, including the Midland Hotel at St Pancras station, the chapel of Exeter College, Oxford, the Albert Memorial and the Foreign & Commonwealth Office, Whitehall. His partner at the time these almshouses were designed was W B Moffatt. Nice pedigree.

The Historic England site mentions that there were originally 5 almshouses. The dedication stone reads, ‘1844 These almshouses were erected in accordance with the wish of Miss Jean Trotter of Dyrham Park’.

There do not seem to be any textual references to Jean Trotter’s almshouses in Victoria County History, but they are shown on a map. Maybe the relevant phrase is ‘there are no endowed’, indicating the upkeep was privately financed or that that the building was given with the wish that others would later provide for it.

Jean Trotter, the daughter of John and Felicity Trotter, was born in Soho Square, in the parish of St Anne, Westminster on 10th November 1804. While she was baptised on the same day, the birth was not registered until 4 years later. She never married. She lived at Connaught Place West, in Middlesex, and died aged just 38 on 29th August 1843 in Florence, where she is buried in the Cimitero Accatolico.

Her will dated 29th July 1843 and proved 29th December the same year includes the clause, ‘I give and bequeath ….. £500 to my brother John Trotter to be applied by him towards the erection of almshouses and for the benefit of the poor in the neighbourhood of Dyrham Park’. This document also lists many of her family connections.

According to F Cass, Dyrham Park was bought in 1798 by John Trotter, who was succeeded by Captain John Trotter, who died in1870. The manor was eventually held by four generations of Trotters, until it was sold to the Middlesex and Hertfordshire county councils in 1938 (which may link with the purchase date of the almshouses just after the War).

A conversation with the owner in October 2016 revealed that the almshouses were in such a poor state by the end of World War II that they were little more than hovels. There was an earth closet at the forge next door, but no gas, electricity or sewage.

The property was bought from Middlesex County Council soon after the end of WWII for £1000. The additions at each end were added at that time. The property is now in private hands and is named Orchard Mead.

A collection of watercolours painted by John Norman 1980 – 2007 is held at HALS ref DE/X1009/1/1. It includes the Almshouses, Old Guinea Inn and Tyttenhanger House, Ridge (includes notes on the parish and village, completed in a calligraphic style).

The link for Historic England is https://historicengland.org.uk/listing/the-list/list-entry/1103540

Jean Trotter’s  burial record can be found at https://www.findagrave.com/memorial/160824659