You are here: Home>Herts history>Places>Almshouses>South Mimms. James Hickson or Brewers 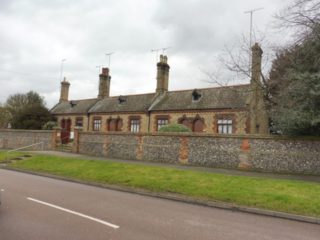 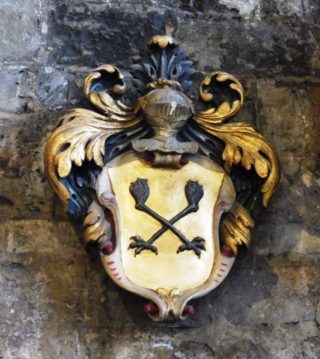 Hickson's arms on the wall inside All Hallows by the Tower. 2018
Colin Wilson 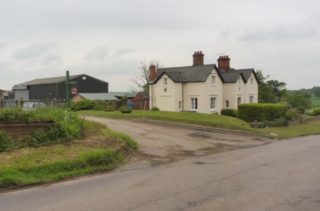 Lower Kitts End Farm house. The plaque on the end has the emblem of the Earl of Strafford with a date of 1873. 2018
Colin Wilson 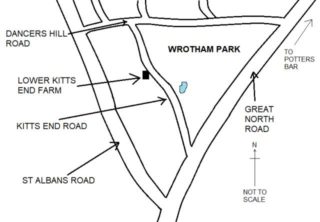 Sketch map showing the location of the almshouse at Kitts End. Note the position of the lake, which (2018) still seems to be present. 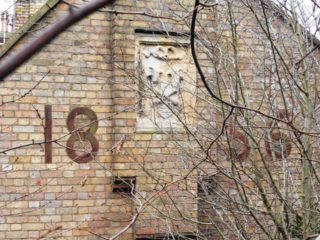 Hickson's arms and the date on the end of the South Mimms almshouse. 2018
Colin Wilson 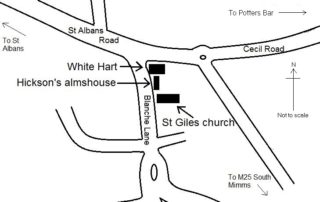 The original almshouses were built in about 1686 at Kitts End, on a site now occupied by Lower Kitts End Farm. They are now located at 99- 109 Blanche Lane, South Mimms, Potters Bar EN6 3PE, situated between the White Hart public house and St Giles Church. As at Jan 2018, the buildings are still in use as almshouses, supported by the Brewers Company. This charity has now been providing help for over 300 years.

James originated from Melton Mowbray. Born in 1607, he became a brewer in London, was elected an alderman of the City of London (Bishopsgate ward) and owned Wyllyotts Manor in Potters Bar. He died in June 1689 aged 82. The context of his life takes him through the Stuart dynasty. He lived through the Civil War, was in his middle years during Cromwell’s protectorate and the restoration of the monarchy, saw the changes brought about by the Plague and the Great Fire of London and died just a few months after William and Mary took the throne. He was buried at All Hallows by the Tower (London). Very little remains of his memorial on the south wall as it was damaged during an air raid in World War II. As at Jan 2018, two of the cherubim are on display in the undercroft museum along with a drawing of his memorial, and his emblem of crossed eagle’s legs are on the north wall near the Lady Chapel. His arms are on display at Brewers Hall as one of the three main benefactors of that organisation (the others being Richard Platt and Dame Alice Owen).

The Worshipful Company of Brewers

One of the oldest Livery Companies in the City of London, the Company received its first charter from Henry VI in 1438 and ranks fourteenth in the order of precedence. It is still active in promoting brewing and is involved with a number of charitable and educational activities. The Charity Commission reference is 215542.

Among his other charities, James Hickson built and endowed an almshouse for 6 people at South Mymms, as evidenced by his will of 1686 in which he refers to ‘the almshouses which I have lately built’. Each dwelling consisted of a single room with a coalshed.

The site was actually at Kitts End (also spelt Kyckes End or Kits End), on the site which is now Lower Kitts End Farm house. It was on the south west edge of Wrotham Park, a little to the north west of The Angel public house. The 1842 tithe map (held at London Metropolitan Archives) records the location as plot 439. A comparison of the Middlesex 1 (pub 1868) and the Hertfordshire XL.SE (pub c1939) Ordnance Survey maps shows different shaped buildings in the same location (by field 361 and BM367.99 respectively), hence the first seems to be the almshouse, the second the farm house.

They were bequeathed to the Brewers Company. MS5481 (held at Guildhall Library) includes references in 1750/1 that the landlord of the Kitts Inn was paid £1 10s for the lodging of almspeople and that Sparkling bricklayers were paid £100 on account to rebuild the almshouses. By the mid 1800s they were in a poor state of repair.

A railway through Potters Bar was proposed, which would affect the estates owned by George Byng (of Wrotham Park). The almshouses were sold to Byng (or his trustees) in 1867; £232 14s 9d was paid by Lord John Thynne and S C Whitbread and heirs for 6 old messuages or almshouses and about 1 rood 4 perches of land. The frontage to the road was about 201ft 6in. At first it was thought they could be used for workmen’s cottages, but they were demolished.

New almshouses were built in 1856 at South Mimms, on the site of the Cross Keys public house, between St Giles church and the White Hart public house. Arthur Patrick Mee, a pupil of Sir John Soane, was the architect, and they cost £900. Hickson’s arms (crossed eagle’s legs) are on the end wall adjoining the churchyard, along with the date. Again they were for six people, who now had two rooms each. They were refurbished in 1990, becoming three dwellings; three of the front doors were sealed. The buildings were listed by Historic England as of grade II status on 12th Aug 1985, with a listing reference 1103556.

James Hickson made provision for the upkeep of the almshouses from his estate of Wyllyotts, which he bequeathed to the Brewers Company. ‘He endowed the Almshouse with a Salarie of £24 a year with some other advantages’. This was augmented by a bequest from Mr John Neiman in 1802 / 1820 and the two charities were combined in 1894.

The occupants were 6 poor widows chosen by the Charity from the poor of the parish of South Mimms. Notice of vacancy was given on the church door. Applicants had to be supported by the minister, Church warden and respectable inhabitants. In about 1890 each almswoman received £3 14s 11d a month from the Trust and 16s 1d a quarter from the Neiman Trust. £3 3s was spent on Christmas gifts. Gowns were given once in two years. Half a ton of coal was given to each every quarter. Disappointed applicants were paid 5 shillings. Some were noted ‘to follow’, and often their names appeared as being elected in future years. A medical attendant, Mr Thompson, was paid £6 6s a year. A nurse, Mrs Pickett, was paid 6 shillings a week (in 1887 this was Mrs [Snifield].

Plans dating from 1856 are held at London Metropolitan Archives, ref k1272947, Collage ref  33062. They can be viewed on-line at https://collage.cityoflondon.gov.uk/view-item?key=SXsiUCI6eyJ2YWx1ZSI6InNvdXRoIG1pbW1zIGFsbXNob3VzZSIsIm9wZXJhdG9yIjoxLCJmdXp6eVByZWZpeExlbmd0aCI6MywiZnV6enlNaW5TaW1pbGFyaXR5IjowLjc1LCJtYXhTdWdnZXN0aW9ucyI6MywiYWx3YXlzU3VnZ2VzdCI6bnVsbH0sIkYiOiJleUowSWpwYk1WMTkifQ&WINID=1590111623916#j7dlTByvahwAAAFyOdhSBA/30287 (Site accessed May 2020)

The Historic England citation can be accessed at https://www.historicengland.org.uk/listing/the-list/list-entry/1103556