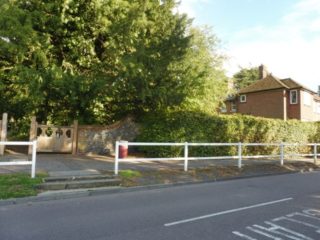 The site of John Howkins' almshouse. The house to the right is the rectory, while the gate to the left leads to St Giles church. 2017
Colin Wilson 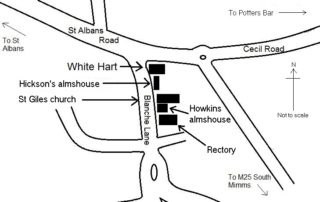 There’s nothing new about ‘nimbyism’ – Not In My Back Yard. John Howkins’ will reveals that the locals were not too happy about an almshouse in their neighbourhood, and he had to take steps to have a decree reversed. He also states he felt very wronged by this and stopped any payments until the decree had been nullified.

John was born at Brownsover in 1579, and had family links with the Lawrence Sheriff who founded Rugby School. He became a lawyer and owned Pinchbank [in Hadley]. His memorial slab in St Michael’s church Brownsover reads, ‘Here lyeth ye body of John Howkins late of ye Honorable Sosiety of ye Middle Temple London who dyed November 16th in ye 99th year of his age 1678’.

Cass records John Howkins died in 1703 and has no memorial although there are memorials to his his wife Mary and his children John and Elizabeth in St Giles church, South Mimms. Other sources put his birth in 1650 or 1653. It seems that Cass has mistaken this John Howkins for the one who built the almshouses. This can be confirmed by reading his will, which clearly states that the John who built the almshouses was the elder cousin and godfather of the John who died in 1703. The confusion arises as there are many people named John Howkins and William Howkins in different branches of the family. Note also the age difference between them.

Some years before 1677 (possibly 1652) John Howkins built five almshouses for poor women on land between the church and the vicarage. Although described as houses, they only had one small room and an even smaller outhouse at the rear. The plot, still vacant in 2018, shows just how small they were.

Owing to the small endowment, during later years only two women were able to live there. The other empty houses soon fell into decay and they practically fell down after the last old lady died in 1925. They were completely demolished in 1927.

Pictures can be found in Potters Bar & District Historical Society; Occasional paper No 4 South Mimms and on the Genealogy in Hertfordshire website (picture dated 1908).

Even so, these almshouses survived for around 275 years.

By his will dated 1677 John Howkins left a rent-charge of £5 a year out of a property called Angells for quarterly payments to the almspeople but did not provide for the upkeep of the houses, which fell upon the parish.
1811 Francis Barroneau left £100 stock, the interest to be distributed half-yearly among the inmates.
1837 Mrs. Kerney left £200 to provide bread and coal for widows in the almshouses.
1844 Elizabeth Barroneau bequeathed £50 stock on similar terms to Francis Barroneau.
George Pooley, by will proved 1883, left £2,500, the income on which was to be paid in doles.
F. Abraham made a gift to Howkins’ almshouses which, in 1899, was represented by £32 stock. Before 1928 an unknown donor had given £24.

Some interesting information can be culled from newspapers. The almshouses are variously called Parish or Pooley. The former seems to because the upkeep was due to the parish, the latter because George Pooley had only recently left a bequest.

By 1887/90 sewage and mains water was laid to the area and the almshouses. By 1905 they were in a deplorable state through neglect and defective flushing.

This illuminating article appeared in The Barnet Press 1908. ‘Mr Gerken, one of the trustees of Pooley’s almshouse, South Mimms Village, applied for exemption from the poor and district rates levied in respect of the almshouses. Mr Gerken said that there were five almshouses occupied by old women, aged respectively, 72, 74, 75. 79 and 80. The income was £61 10s per year, and the money was paid by the Charity Commissioners quarterly in the sums of £15 7s 6d. The money was paid to the old women monthly, in the sums of £1 0s 6d each, and all the income was thus absorbed. Nothing was left for repairs etc. The Overseers were unanimously in favour of the exemption being granted’.

As far as repairs are concerned outside help was usually required. In 1890 there was a request for a subscription. The Barnet Amateur Operatic Society held a fund-raising concert in 1909 as ‘there is at South Mimms no fund available for repairs and periodical whitewashing and papering’.

Following the demolition of the almshouses, the income was distributed as pensions.

Under a Scheme of 1941 the gifts of Howkins, the Barroneaus, Kerney, Pooley, the unknown donor, Abraham, Bradshaw, Bates, and Nicholson were consolidated as the South Mymms Parochial Charities. The charities were to be managed under that title, although each would retain its own identity.

The annual income of £77 7s. 8d. from Howkins’ and the six other related charities was to be applied in pensions of between 6s. 6d. and 10s. a week to poor women of good character who had resided in the parish for at least two years. One of the pensioners was to be a widow and called ‘the Kerney pensioner’. The annual income of £8 15s. from the charities of Bates and Nicholson was to be spent on coal for poor persons living in South Mimms and not in receipt of poor law relief, as selected by the trustees. The £3 from Bradshaw’s charity was to provide 20s. to the vicar as before and 40s. in cash or bread for distribution among parishioners attending the ‘Bread Service’.