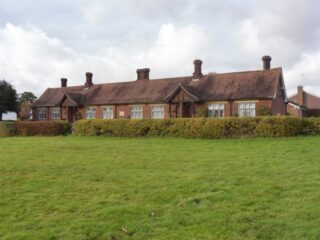 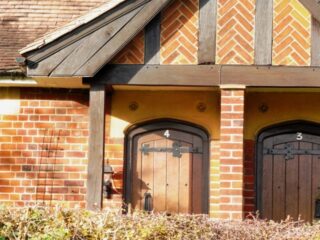 The doors to the almshouse, in a style an architect friend described as 'Tudorbethan'. Nov 2016 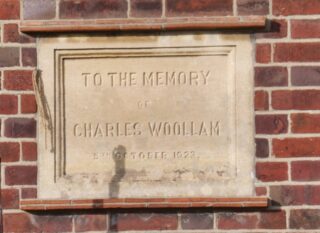 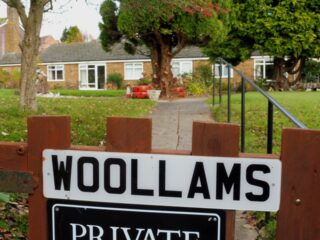 The new dwellings and the central green at Woollams. Nov 2016
Colin Wilson 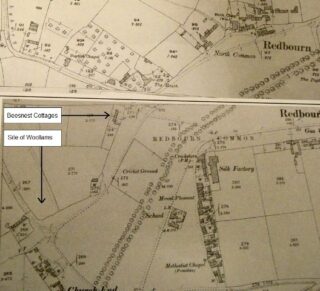 The Woollam family was involved in the silk business for about a century, starting in 1811 while the Napoleonic Wars were going on. The family abode was in Hampstead, then in St Albans by around 1840. An additional silk mill was built at Redbourn in 1857.

Charles Woollam
The 1851 census listed a certain Charles as a 19 year old scholar at St Albans Grammar School (where he won prizes for mathematics and classics). The 1861 Census showed Charles living at the Mill House, Redbourn, with his parents, listed as a silk throwster. This is the process by which silk skeins are converted into silk thread. It was in 1868 that Charles married Mary Elliot. Charles took over the running of the mill by 1871.

Charles sold his mills and retired in 1906, by which time the silk trade was declining, and died in 1915  aged 73. During his life he combined his role as a successful industrialist with a remarkable record of public service, with interests in the civic, countryside preservation and charity spheres.

Mary Woollam continued his charitable works till her death in 1925 at the age of 84. Part of this was to establish a group of 4 almshouses on land which had been given as allotments by her husband, the rents being given to the poor. The datestone cites 1923, but some sources quote 1926. Maybe it took 3 years for the buildings to be finished, but this seems to be rather a long timescale. If so, Mary would not see this project completed. A photograph from the 1920s can be found in Geoff Webb’s article on the Herts Memories website.

Alan Featherstone writes that Charles gave a piece of land called ‘The Brache’ as further old people’s bungalows – the  rest of the land being reserved for allotments, the rents being given to the poor. This may indicate an almshouse provision prior to the current building, but no information has yet been found. The 1924 OS map (surveyed 1922) shows the site as allotment gardens, with no buildings. Unfortunately it has not been possible to consult later maps.

In 1961-2 the land behind the almshouses was sold to the Rural District Council for development, part of the land being reserved for old people’s bungalows. They did not follow the pattern of the original almshouses but were in a modern style. There is a large area of open grass in the centre.

Especially in recent years the quality of care has been headlined in the country. The accounts for 2021 filed with the Charity Commission show that Woollams is fortunate. They refer to the part-time warden (in post 11 years at that time). To quote from the report, ‘She has made a remarkable difference to the community living at Woollams, both in practical terms and with regard to the residents’ well-being. She lives on site, and her enthusiasm, energy, reliability and dedication to her role is commendable. She demonstrates daily that nothing is too much effort or trouble, and deals promptly with problems that arise, making Woollams a truly supportive place to live’. Such people are rarely mentioned but are worth their weight in gold. There are many activities organized for the residents. Furthermore the Trustees meet the residents twice during the year to provide an update and discuss matters of concern.

Rising costs are a fact of life, so sometimes the contributions paid by the residents have to increase. However, they are monitored to be less than comparable local properties.

The Charity Commission website reveals there are 10 linked charities, each one providing for the almshouses along with other local causes. Victoria County History lists these. They go back to 1560, hence none (except for the Woollams charities) were set up for the Woollams almshouses. Their link to Woollams is because they are amalgamated with the Redbourn Charities, and their aims may have been altered to reflect that. For the future, the almshouses seem to be on a stable footing, and are in a very pleasant location.

The Redbourn Charities are registered with the Charity Commission, ref 217154 and affiliated to the Almshouse Association.

Redbourn Through Time by Geoff Webb
Page 93 Photo of Woollams almshouses c1925. Geoff delivered milk to the residents, and often chatted with them.
Amberley Publishing 2008 ISBN 1 84868 128 6

https://www.hertsmemories.org.uk/content/herts-history/towns-and-villages/redbourn-2/the-geoff-webb-collection/redbourn-places/the-alms-houses. Contains an extended biography and details of the mills. Also has a photo of Charles Woollam