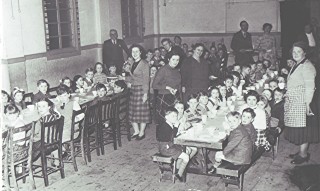 Coronation tea party for Redbourn children in the Village Hall.