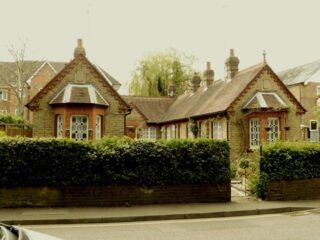 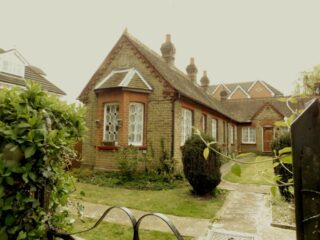 The central garden and entrances of the Beresford almshouses in Bury Lane. April 2017
Colin Wilson 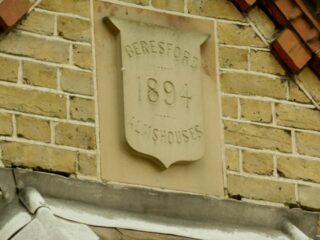 The datestone on one of the gables on the Beresford almshouses in Bury Lane. April 2017
Colin Wilson

The English Civil War was a lucrative time for John Beresford, who made his money selling gunpowder. He erected 2 dwellings ‘at the town’s end’ for 4 destitute people of Rickmansworth in 1657 (or possibly 1653). Following his death (in 1663?) they were transferred to the parish in 1686, but there was no endowment. The Churchwardens had the power of appointing residents. William Ford (1681) and Lady Ann Franklin (1708) (Cussans incorrectly dates this 1798) provided bequests for repairs and some payments respectively.

By 1807 the buildings were derelict and unfit to live in so were demolished and replacements built a little further back from the road. The local cage was nearby and in use until 1864. It was then used as the wash-house for the almshouses.

The buildings were again in a state of disrepair by about 1890, and Rickmansworth had expanded. The local police needed a larger site, so the almshouses were purchased and new ones built nearby in Bury Lane, next to the ford. The police station building at 177 High Street is now a William Hill betting shop.

A number of newspaper articles from the 1890s detail the discussions about selling the old site and the construction of the new buildings. The site was sold to the Council for £400. Lord Ebury gave the land in Bury Lane, and the sale of some consols raised further £195 15s. Messrs. Gurney and Swannell drew up the plans for 6 new almshouses, but other sources suggest there were only 4, and this is confirmed by the OS map. Other sources refer to 10 almswomen, but these sources are about Rickmansworth, hence include the Fotherley almshouses. Each almshouse would contain a spacious and lofty bedroom, living room and wash-house. The work was carried out by Mr. T. Holland, whose tender was £596 15s. Trustees were appointed from the parishes of Chorleywood, Croxley Green, Mill End and West Hyde. When Rickmansworth was divided, one dwelling was kept for the use of a Chorleywood resident.

References in the newspapers suggest the residents were female, while the governing documents specify ‘persons’.

These buildings still exist and are in use as almshouses or social housing, managed by Home Group Ltd. They were still affiliated to the Almshouse Association in 2016. The Beresford Charity is linked with the Rickmansworth Almshouse Charities ref 229341. While Ford’s charity continues, the Franklin and Fellows charities have ceased.

There are a few other references in the newspapers.
in 1877 the Rickmansworth Philanthropic Society was wound up. The residual funds were distributed between 12 poor people and the 11 almshouse women.
One case of attempted fraud was a woman who said she could obtain grants for the residents if they could pay a small sum up front. Fortunately she did not succeed. This was at the time the premises were being moved but the same ploy was tried with the Fotherley almshouse residents so was probably a
co-incidence. Some things never change.
In 1889 Eliza Green, a widow, 71 years old, was found dead in bed by the side of one of her granddaughters, who usually slept with her. The old lady went to bed on the previous Sunday night in her usual health. An inquest was deemed unnecessary as she was known to suffer from heart disease and that was the primary cause of death. Judging by the age the grand-daughter would have been a younger woman rather than a child. Whether she was treated as an extra almswoman, allowed to live there, or acted as a carer is unknown.

And, of course, in 1892/3 there were teas at the Vicarage, by kind invitation of the Rev. A. E. and Mrs. Northey. The latter event was in celebration of wedding of the Duke of York and Princess May.

One extra comment needs to be made. John Fotherley also built almshouses in Rickmansworth, and there seem to be cases of confusion between the two. Beresford’s almshouse were variously known as Beresford, Church or Parish. Fotherley’s were referred to as Fotherley or Manor. Even so, it is not always clear which is referred to as the reference is to the Rickmansworth almshouses.

Neither Chauncy or Clutterbuck mention these almshouses

Newspaper articles can be viewed on the British Newspaper Archive website at https://www.britishnewspaperarchive.co.uk/